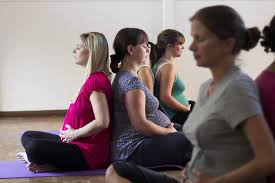 Reduce Depression and Anxiety Around Pregnancy with Mindfulness

“By learning mindfulness skills as part of their childbirth education, expectant mothers can reappraise the impending birth as something they can handle instead of viewing it as something to fear.” – Larissa Duncan

The perinatal period, from the onset of pregnancy to the end of the infants first year, is a time of intense physiological and psychological change in both the mother and the infant. Anxiety, depression, and fear are quite common during pregnancy. More than 20 percent of pregnant women have an anxiety disorder, depressive symptoms, or both during pregnancy. A debilitating childbirth fear has been estimated to affect about 6% or pregnant women and 13% are sufficiently afraid to postpone pregnancy. It is difficult to deal with these emotions under the best of conditions but in combinations with the stresses of pregnancy can turn what could be a joyous experience of creating a human life into a horrible worrisome, torment.

The psychological health of pregnant women has consequences for fetal development, birthing, and consequently, child outcomes. Depression during pregnancy is associated with premature delivery and low birth weight. Childbirth fear is associated with “low childbirth self-efficacy, greater use of pain medication during labor, more unwanted obstetric interventions in labor, as well as increased risk of postpartum depression.” Hence, it is clear that there is a need for methods to treat childbirth fear, depression, and anxiety during pregnancy. Since the fetus can be negatively impacted by drugs, it would be preferable to find a treatment that did not require drugs. Mindfulness training has been shown to improve anxiety and depression normally and to relieve maternal anxiety and depression during pregnancy. So, it would make sense to study the effects of mindfulness training during the perinatal period.

In today’s Research News article “The Effectiveness of Mindfulness-Based Interventions on Maternal Perinatal Mental Health Outcomes: a Systematic Review.” See summary below or view the full text of the study at: https://www.ncbi.nlm.nih.gov/pmc/articles/PMC5506176/, Shi & MacBeth reviewed the published research literature on the effectiveness of mindfulness training on the emotional states of women in the perinatal period. They found 18 published studies that employed Mindfulness-Based Stress Reduction (MBSR), Mindfulness-Based Cognitive Therapy (MBCT), or mindful yoga as the treatment for anxiety and depression during the perinatal period.

They found that the research indicated that mindfulness-based treatments were particularly effective for anxiety and to a lesser extent for depression and its recurrence. The treatments were reported to be safe, with no appreciable negative side effects, and acceptable, with low drop out rates. They note that there is a need for more highly controlled randomized controlled trials that include active control conditions in the future.

The results from the summarized 18 studies suggest that mindfulness based interventions are safe and effective treatment for perinatal anxiety and depression. Mindfulness practices have been shown to increase the focus on the present moment. Anxiety tends to revolve around the future while depression appears to revolve around the past. By focusing the individual on what is occurring in the present moment mindfulness training appears to decrease thinking about the past or the future and may thereby reduce anxiety and depression. Mindfulness training has also been shown to reduce the physiological and psychological responses to stress. The reduction in stress responses during the high stress perinatal period may also contribute to the women’s improved mood.

So, reduce depression and anxiety around pregnancy with mindfulness.

“Since mindfulness has a lot to do with being in touch with the sensations in your body, and being aware, new moms are in a prime state to learn it! In fact, pregnancy and early motherhood, nursing and sleep disturbance, weight gain and weight loss-these all in some way force you to be in your body. For those of us who live most of our lives above our necks, this can actually be a great blessing.” – Cassandra Vieten

Presenting with common mental health difficulties, particularly depression and anxiety, there is also preliminary evidence that mindfulness-based interventions (MBIs) including mindfulness-based cognitive therapy (MBCT), mindfulness-based stress reduction (MBSR) and integrated mindfulness yoga practices may also be effective in reducing common mental health difficulties during pregnancy. We systematically reviewed and synthesized the current literature on the effectiveness of MBIs in reducing severity of perinatal anxiety and depression. Databases including PubMed, Cochrane Library, IndMED and PsychoInfo were searched for relevant studies. Manual searches were conducted in relevant articles and Google Scholar. Seventeen cohorts representing 18 studies were included. Pre-post effect sizes were reported for both treatment and control groups. Seven randomized controlled trials (RCTs), two non-randomized controlled trials and nine treatment evaluations were included. Maternal participation in an MBI was associated with reductions in perinatal anxiety of moderate to large magnitude. Results for the effect of MBIs on depression were less consistent, with pre-post treatment reductions of moderate magnitude, but no significant differences in depression scores when MBI was compared with a control group. There was some evidence that MBIs were associated with increased mindfulness. Risk of bias in studies was variable. Our review offers preliminary evidence for the effectiveness of MBIs in reducing perinatal anxiety, with more equivocal findings with regard to perinatal depressive symptoms. Further methodologically rigorous evaluation using RCTs and longer follow-up periods are recommended.