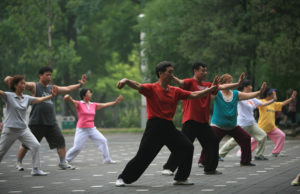 Improve the Negative Symptoms of Schizophrenia with Tai Chi.

“Tai Chi, can potentially reduce psychopathological and negative symptoms, decrease aggressive behaviors, and improve quality of life. It is an ideal rehabilitation intervention for patients with schizophrenia.” – Supreme Chi Living

Schizophrenia is the most common form of psychosis. It effects about 1% of the population worldwide. It appears to be highly heritable and involves changes in the brain. It is characterized by positive symptoms such as hallucinations; seeing and, in some cases, feeling, smelling or tasting things that aren’t there, or delusions; unshakable beliefs that, when examined rationally, are obviously untrue. It is also characterized by negative symptoms involving a reduced ability to function normally, neglect of personal hygiene, lack of emotion, blank facial expressions, speaking in a monotone, loss of interest in everyday activities, social withdrawal, an inability to experience pleasure, and a lack of insight into their symptoms. The symptoms of schizophrenia usually do not appear until late adolescence or early adulthood.

Schizophrenia is very difficult to treat with psychotherapy and is usually treated with antipsychotic drugs. These drugs, however, are not always effective, sometimes lose effectiveness, and can have some difficult side effects. In addition, even when effective, antipsychotic drugs only treat the positive symptoms of schizophrenia, leaving the negative symptom intact including the loss of functionality and a lack of insight. Hence, there is a need for safe and effective alternative treatments for schizophrenia that can treat the negative symptoms.

Mindfulness training has been shown to be beneficial for a variety of mental health problems, including anxiety, depression, Antisocial Personality Disorder, Borderline personality disorder, impulsivity, obsessive compulsive disorder, phobias, post-traumatic stress disorder, sexual dysfunction, and suicidality. It also appears to be helpful with psychosis. Mindfulness has also been shown to associated with lower symptom severity of schizophrenia. This suggests that mindfulness training may be an effective treatment for schizophrenia, including negative symptoms.  Tai Chi practice includes mindfulness training and also gentle physical exercise which may also be beneficial. Hence, it would seem reasonable to examine the ability of Tai Chi practice in treating the symptoms of schizophrenia.

In today’s Research News article “Tai Chi for Schizophrenia: A Systematic Review.” See summary below or view the full text of the study at:

https://www.ncbi.nlm.nih.gov/pmc/articles/PMC5434269/ Zheng and colleagues review and perform a meta-analysis of published research studies examining the effectiveness of Tai Chi practice in treating schizophrenia. They found 6 published randomized controlled trials. They found that compared to controls Tai Chi practice produced significant reductions in the negative symptoms of schizophrenia but not the positive symptoms. In addition, they report that there is a significant improvement in social function.

So, improve the negative symptoms of schizophrenia with Tai Chi.

“The usual method for treating schizophrenic patients focuses on self-care, symptom management, and dealing with daily functions. Unfortunately, physical and psychological well-being fall by the wayside, since simply dealing with day-to-day functions is enough of a struggle for most schizophrenic individuals. The mind-body connection provided by Tai-chi is believed to make it the optimal type of exercise for individuals with mental illnesses.” – Katie Dabrowski

A systematic review and meta-analysis was conducted to examine the efficacy of Tai Chi as an adjunctive treatment for schizophrenia using randomized controlled trial (RCT) data.

The data available on the effectiveness of adjunctive Tai Chi in patients with schizophrenia who are receiving antipsychotic is insufficient to arrive at a definitive conclusion about its efficacy. Furthermore, follow-up time in the available studies was relatively short, and all studies did not use blinded assessment of outcome measures. High-quality randomized trials are needed to inform clinical recommendations.

One thought on “Improve the Negative Symptoms of Schizophrenia with Tai Chi.”