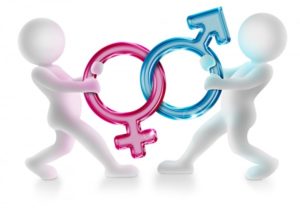 Decrease the Negative Effects of Gender Nonconformity with Mindfulness

“Humanity’s most valuable assets have been the non-conformists. Were it not for the non-conformists, he who refuses to be satisfied to go along with the continuance of things as they are, and insists upon attempting to find new ways of bettering things, the world would have known little progress, indeed.” – John Kenneth Galbraith

Gender is defined by our genes. If we have two X Chromosomes we’re female. If we have an XY pair, we’re male. But, the role we play, how we act, based upon gender is learned and very much dependent upon societal norms and mores. “Gender nonconformity (also known as gender atypicality) refers to the incongruence between the biological sex assigned at birth and the socially prescribed gender role.” (American Psychological Association (APA) 2012). This nonconformity occurs associated with all forms of gender identity and sexual orientations.

There is always a price that individuals must pay anytime that they violate societal norms. The stigma, stress, and emotionality produced by violating the norms can impact the mental and physical health of the individual. On the other hand, mindfulness has been shown to reduce the physiological and psychological effects of stress, improve the ability to cope with emotions, and improve self-compassion. Thus, there is a need to better understand the effects of mindfulness and self-compassion on the well-being of individuals who are gender nonconformists.

In today’s Research News article “Trait Mindfulness and Self-Compassion as Moderators of the Association Between Gender Nonconformity and Psychological Health.” (See summary below). Keng and colleagues recruited a varied adult sample of over 200 individuals with all forms of gender identity and sexual orientations. They were asked to complete measures of sexual orientation, gender nonconformity, anxiety, depression, subjective well-being, mindfulness, and self-compassion. About 2/3rds of the participants were heterosexual while 21% were gay or lesbian, 5% bisexual, and 6% other orientations.

It will be important in future research to investigate if mindfulness training in people high in gender nonconformity can reduce its negative effects. This may be important in helping people whose gender identity and sexual orientation are contrary to the existing societal mores, improving their psychological health and well-being.

So, decrease the negative effects of gender nonconformity with mindfulness.

“Improved affect in women was related to improved mindfulness and self-compassion skills, which involved specific subscales for approaching experience and emotions with non-reactivity, being less self-critical and more kind with themselves, and over-identifying less with emotions,” – Willoughby Britton