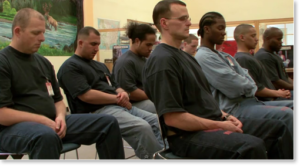 “Mindfulness training helps youth consider more adaptive alternatives. It creates a gap between triggers for offending behavior and their responses. They learn to not immediately act out on impulse, but to pause and consider the consequences of a potential offending and high risk behavior.” – Bethany Casarjian

Prison provides a great deal of time for reflection and self-exploration. This provides an opportunity for growth and development. Contemplative practices are well suited to this environment. Meditation teaches skills that may be very important for prisoners. In particular, it puts the practitioner in touch with their own bodies and feelings. It improves present moment awareness and helps to overcome rumination about the past and negative thinking about the future. It’s been shown to be useful in the treatment of the effects of trauma and attention deficit disorder. It also relieves stress and improves overall health and well-being. Finally, meditation has been shown to be effective in treating depression, anxiety, and anger. It has also been shown to help overcome trauma in male prisoners.

In today’s Research News article “A Pilot RCT of a Values-Based Mindfulness Group Intervention with Jail Inmates: Evidence for Reduction in Post-Release Risk Behavior.” (See summary below). Malouf and colleagues recruited 40 adult male prisoners who were approaching time for their release. They were randomly assigned to receive either the usual pre-release treatment or a mindfulness-based pre-release program called Re-entry Values and Mindfulness Program (REVAMP). REVAMP utilizes a variety of exercises to reduce experiential avoidance and alleviate psychological suffering including metaphors, distress tolerance skills, and mindfulness meditation practices They were measured before and after treatment, 3 months and 3 years after release for mindfulness, emotion regulation, self-control, impulsivity, shame-proneness, guilt-proneness, personality, and substance abuse. Follow-up measure included criminal records and recidivism.

They found that in comparison to the treatment as usual group, the REVAMP group had significantly increases in the mindfulness facets of non-judging, and willingness/acceptance and increases in shame. Importantly, the REVAMP program reduced criminal behavior and re-arrests and recidivism. In particular, 80% of the control group were rearrested by the three-year post-release point, while only 62% of the REVAMP group were rearrested.

These are important results produced by a small pilot study. They suggest that mindfulness-based therapy provided pre-release improves the mindfulness and psychological condition of the prisoners and then post-release reduces criminal activity and re-arrests. Hence, mindfulness training may be of significant help to prisoners in reintegrating back into society.

So, reduce prison recidivism with mindfulness.

“Yoga and meditation are continuously proven among the most effective therapies for those living with complex residual trauma, and prisons are home to what may be the most concentrated population of individuals plagued by trauma. Meditation and yoga can positively impact those who are suffering from complex trauma, as they begin to confront how it is they got where they are.” – Amy Osborne

This study pilot-tested a values and mindfulness-based intervention (Re-Entry Values and Mindfulness Program: REVAMP) in a sample of male jail inmates. REVAMP aimed to reduce post-release risky behavior by targeting dimensions of mindfulness (e.g., willingness/acceptance) and associated proximal outcomes/ mechanisms of action (emotion regulation, self-control, shame/guilt). Inmates were randomly assigned to REVAMP (n = 21) or treatment as usual (TAU, n = 19). Attendance and feedback supported REVAMP’s feasibility and acceptability. At post-treatment, ANCOVAs showed that the REVAMP group increased more on willingness/acceptance, self-judgment, and shame relative to TAU. Relative increases in willingness/acceptance persisted at 3-month post-release. Criminal activity was assessed by self-report at 3 months post-release and official criminal records at 3 years post-release. At both time points, there was a marginally statistically significant trend of medium effect size for lower criminal recidivism in the REVAMP group compared to TAU. There were no statistically significant differences in self-reported post-release substance misuse. This pilot RCT indicated mindfulness-based interventions may hold promise for reducing inmates’ post-release risky behavior and encourages future research in this area.