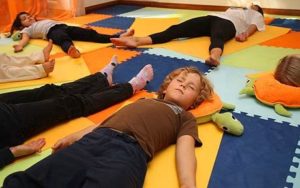 “yoga can be of significant benefit to children with ASD. In addition to benefits typically associated with yoga such as increased strength, balance, coordination and flexibility, benefits such as increased social-emotional skills, language and communication, body awareness, self-regulation, focus and concentration and a reduction in anxiety, impulsive, obsessive, aggressive and self-stimulatory behaviors have also been noted.” – Shawnee Hardy

ASD is a serious disorder that impairs the individual’s ability to lead independent lives including completing an education, entering relationships or finding and holding employment. Its causes are unknown and there are no known cures. Treatment is generally directed at symptoms and can include behavioral therapies and drug treatments. Clearly, there is a need for effective treatment options. Mindfulness training has been shown to be helpful in treating ASD. Exercise has also been shown to help relieve some of the symptoms of ASD. It stands to reason, then, that the combination of mindfulness training and exercise provided by yoga practice would be effective for the symptoms of ASD.

In today’s Research News article “Efficacy of Structured Yoga Intervention for Sleep, Gastrointestinal and Behaviour Problems of ASD Children: An Exploratory Study.” See summary below or view the full text of the study at: https://www.ncbi.nlm.nih.gov/pmc/articles/PMC5427410/, Narasingharao and colleagues performed a pilot study the ability of yoga training to alleviate some of the symptoms of Autism spectrum disorder (ASD). They recruited children between the ages of 5 and 15 years who had been diagnosed with ASD and their parents. Children were excluded if they had severe health issues or exhibited symptoms of Attention Deficit and Hyperactive Disorder (ADHD). The children were randomly assigned to receive either 90 days of structured yoga instruction and practice for 75 minutes daily in the morning or to a no treatment control condition. The yoga program included breathing exercises, postures, and relaxation. The parents and teachers of the children completed evaluations before and after treatment of the children’s sleep, gastrointestinal problems, and behavioral problems.

They found that after treatment the yoga group, but not the control group, demonstrated significant improvements in sleep and increases in uninterrupted sleep, significant improvements in digestive problems, and significant improvements in behavior. The children improved in attention, hyperactivity, social interactions, verbal behavior, cognitive performance, body awareness, and autistic behaviors. This was a pilot study and a randomized controlled trial needs to be conducted with an active control group, more objective measures of behavior, and longer term follow-up. The active control is needed to determine if the exercise and not the yoga per se was responsible for the improvements. Nevertheless, the results are striking and certainly justify the investment in performing a larger trial.

The findings are exciting. Keeping in mind the limitations in drawing conclusions based upon a pilot trial, the results suggest that yoga practice produces significant improvements in the symptoms of Autism spectrum disorder (ASD) in children. These improvements, in turn, markedly improved life for the parents and teachers. Since ASD is so difficult to treat, the present results are particularly exciting and suggest that the discipline of yoga may be of great benefit to the children with ASD and the people who have to care for or teach them.

So, improve childhood autism with yoga.

“It seems there is little these days that doesn’t benefit from yoga, and it is amazing to see yoga work its magic on children with autism and their families.” – Elizabeth Rowan

The aim of this study was to find out efficacy of structured yoga intervention for sleep problems, gastrointestinal problems and behaviour problems of ASD children.

It was an exploratory study with pre-test and post-test control design. Three sets of questionnaires having 61 questions developed by researchers were used to collect data pre and post yoga intervention. Questionnaires were based on three problematic areas of ASD children as mentioned above and were administered to parents by teachers under the supervision of researcher and clinical psychologists. Experimental group was given yoga intervention for a period of 90 days and control group continued with school curriculum.

Both children and parents participated in this intervention. Significant changes were seen post yoga intervention in three areas of problems as mentioned above. Statistical analysis also showed significance value of 0.001 in the result.

Structured yoga intervention can be conducted for a large group of ASD children with parent’s involvement. Yoga can be used as alternative therapy to reduce the severity of symptoms of ASD children.