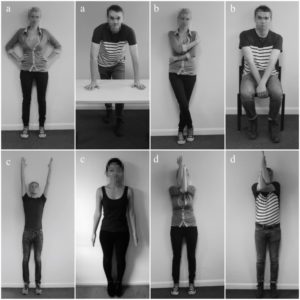 “Yoga allows us to start to slow down the self-critic, and start to observe that this voices in our heads isn’t necessarily the reality. To slow down and get into the body and say ‘OK, when these thoughts are coming up, there’s something actually behind the thoughts that we’re observing’ — that connects us more to our true self versus the dialogue that may be running us.” – Vyda Bielkus

Yoga practice has been repeated demonstrated in research studies to be beneficial for the psychological and physical health of the practitioners. But, yoga is a complex of practices including postures, movements, breathing practices and meditation. In addition, there are a wide variety of practices including Vinyoga, Iyengar, Ashtanga, Bikram, Power, Kundalini, Sivananda, Kripalu, Anusara, and Hatha, and others. To better utilize yoga practice for particular issues, it would be useful to examine which components of yoga practice benefits which areas of mental and physical health.

In today’s Research News article “Yoga Poses Increase Subjective Energy and State Self-Esteem in Comparison to “Power Poses.” See summary below or view the full text of the study at: https://www.ncbi.nlm.nih.gov/pmc/articles/PMC5425577/, de Zavala and colleagues compared power vs. yoga poses with open front of body vs. covered front of body in their ability to alter energy and self-esteem. They recruited college students and randomly assigned them to one of four groups; power pose-open front, power pose-covered front, yoga pose-open front, yoga pose-covered front in a 2X2 randomized factorial design. The participants held two poses in their respective category for 1 minute each. They were measured before and after the brief yoga practice for self-esteem and subjective energy.

They found that momentarily holding yoga poses, but not power poses, produced a significant increase in self-esteem that was mediated by increases in subjective energy. That is, both the yoga pose-open front and yoga pose-covered front increased subjective energy which, in turn, increased self-esteem. These effects are particularly interesting as they were produced by holding two poses for only 1 minute each. It’s quite striking to see such extremely brief poses producing significant effects on the participants psychology.

It is also striking that these effects were only present for the yoga poses and not the power poses. The explanation for these effects is not obvious. It is possible, though, that erect, straight poses, particularly those where the hands are held above the head are more strenuous, particularly on the cardiovascular system, and this leads to a sympathetic arousal response, making the individual feel more energetic. Feeling more energetic may make the individual feel better about themselves which in turn improves self-esteem.

This study is particularly interesting as it points to a productive strategy to unraveling how yoga practice has such widespread benefits for the physical and mental health of the participants. By investigating the physiological and psychological effects of individual poses it may be possible to glimpse the mechanisms by which complex yoga practices produce their benefits. This is a classic case of reductionism, taking a complex phenomenon apart into its constituent parts and then recombining the individual effects of the parts to understand the whole. This is an interesting strategy that only future research will determine if it’s a valuable way to unlock the mechanisms producing the benefits of yoga practice.

“Yoga makes a difference because of its emphasis on self-acceptance, something that’s largely missing for those of us who dislike our bodies. The program in our heads—I’m not pretty enough, thin enough, tall enough—builds in volume over years until it’s practically the only radio station playing. Odd as it seems, the vessel that keeps us alive, that nourishes us, begins to get nothing but our scorn in return.” – Dorothy Foltz-Gray

Research on beneficial consequences of yoga focuses on the effects of yogic breathing and meditation. Less is known about the psychological effects of performing yoga postures. The present study investigated the effects of yoga poses on subjective sense of energy and self-esteem. The effects of yoga postures were compared to the effects of ‘power poses,’ which arguably increase the sense of power and self-confidence due to their association with interpersonal dominance (Carney et al., 2010). The study tested the novel prediction that yoga poses, which are not associated with interpersonal dominance but increase bodily energy, would increase the subjective feeling of energy and therefore increase self-esteem compared to ‘high power’ and ‘low power’ poses. A two factorial, between participants design was employed. Participants performed either two standing yoga poses with open front of the body (n = 19), two standing yoga poses with covered front of the body (n = 22), two expansive, high power poses (n = 21), or two constrictive, low power poses (n = 20) for 1-min each. The results showed that yoga poses in comparison to ‘power poses’ increased self-esteem. This effect was mediated by an increased subjective sense of energy and was observed when baseline trait self-esteem was controlled for. These results suggest that the effects of performing open, expansive body postures may be driven by processes other than the poses’ association with interpersonal power and dominance. This study demonstrates that positive effects of yoga practice can occur after performing yoga poses for only 2 min.