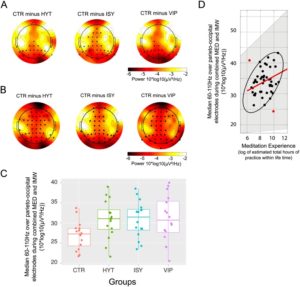 “Most people tend to believe that all types of meditations are the same. It is common to hear about the benefits of “meditation,” but most people don’t know that there are different benefits to be obtained based specifically on the type of meditation practice pursued.“ – Mental Health Blog

Meditation training has been shown to improve health and well-being. It has also been found to be effective for a large array of medical and psychiatric conditions, either stand-alone or in combination with more traditional therapies. As a result, meditation training has been called the third wave of therapies. One problem with understanding meditation effects is that there are, a wide variety of meditation techniques and it is not known which type or which component produce which effects.

There are a number of different types of meditation. Many can be characterized on a continuum with the degree of attentional focus. In focused attention meditation, the individual practices paying attention to a single meditation object, learns to filter out distracting stimuli, including thoughts, and learns to stay focused on the present moment, filtering out thoughts centered around the past or future. On the other hand, in open monitoring meditation, the individual opens up awareness to everything that’s being experienced regardless of its origin. These include bodily sensations, external stimuli, and even thoughts. The meditator just observes these stimuli and lets them arise, and fall away without paying them any further attention.

One potential method to discern the different effects of these differing meditation techniques is to observe the effects of these techniques on the nervous system. There is evidence that meditation alters the brain. It can produce relatively permanent changes to the nervous system, increasing the activity, size, and connectivity of some structures while decreasing it for others in a process known as neuroplasticity. A common method to study the activity of the nervous system is to measure the electrical signal at the scalp above brain regions. Changes in this activity are measurable with mindfulness training.

In today’s Research News article “Increased Gamma Brainwave Amplitude Compared to Control in Three Different Meditation Traditions.” See summary below or view the full text of the study at:

Braboszcz and colleagues investigate the effects of three different kinds of meditation that differ on the degree of attentional focus on the electrical activity of the brain (EEG) under different mental states. They investigated the effects of a focused meditation employing mantra repetition (Himalayan Yoga), an open monitoring meditation focusing on body sensations (Vipassana) and a complete open awareness meditation technique (“Shoonya” meditation). They recruited experienced meditators who practiced one of the three techniques and also a group of comparable participants with no meditation experience. The Electroencephalogram (EEG) of the participants was measured during 20 minutes of meditation and 20 minutes of instructed mind wandering.

They found that regardless of the meditation or mind wandering condition the three meditation groups in comparison to the non-meditators had significantly larger amounts of high frequency waves (gamma – 60-110 cycles per second, Hz.) in the EEG. They also found that the amount of gamma activity was associated with the amount of meditative experience of the practitioners, with the more the experience, the greater the gamma activity. In addition, they found that the Vipassana meditation practitioners had significantly larger amounts of low frequency waves (alpha – 8-11 cycles per second, Hz.) than the other meditation groups or the controls regardless of condition.

The fact that the differences in the gamma activity in the EEG of the three groups of meditators compared to controls were present regardless of the meditation or the mind wandering condition, suggests that the increased gamma activity results from relatively permanent changes in the brain produced by the meditation training, neuroplasticity. Gamma activity is generally associated with an overall attentive state. Hence, the results suggest that meditation practice, regardless of type, strengthens attentiveness. This is compatible with the findings that meditation training improves attentional ability.

The fact that the differences in the alpha activity in the EEG of the Vipassana meditation practitioners compared to controls and the other two meditation groups were present regardless of the meditation or the mind wandering condition, suggests that the increased alpha activity also results from relatively permanent changes in the brain neuroplasticity. It is interesting that this group of meditators differed from the other groups in alpha activity. High levels of alpha waves have been associated with selective attention where the individual ignores most stimuli to focus on only a specific set of stimuli. Hence, this suggests that the Vipassana practice, which focuses on internal sensations of the body, may be superior to the other meditation techniques in developing selective attentional ability.

“There are many systems of meditation that widely differ from one another in their procedures, contents, objects, beliefs, and goals.  Given these differences, it is not surprising that research has shown they have different subjective and objective effects.” – David Johnson

Despite decades of research, effects of different types of meditation on electroencephalographic (EEG) activity are still being defined. We compared practitioners of three different meditation traditions (Vipassana, Himalayan Yoga and Isha Shoonya) with a control group during a meditative and instructed mind-wandering (IMW) block. All meditators showed higher parieto-occipital 60–110 Hz gamma amplitude than control subjects as a trait effect observed during meditation and when considering meditation and IMW periods together. Moreover, this gamma power was positively correlated with participants meditation experience. Independent component analysis was used to show that gamma activity did not originate in eye or muscle artifacts. In addition, we observed higher 7–11 Hz alpha activity in the Vipassana group compared to all the other groups during both meditation and instructed mind wandering and lower 10–11 Hz activity in the Himalayan yoga group during meditation only. We showed that meditation practice is correlated to changes in the EEG gamma frequency range that are common to a variety of meditation practices.