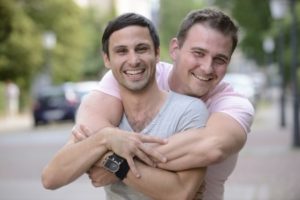 “spirituality can offer a vision of hope and meaning in a world that sometimes appears to be a hopeless miasma of pain and suffering. At its best, spirituality bestows vision and love of life. It widens our perspective. It sensitizes us to beauty and vitality–the very things at which gay men excel.” – Toby Johnson
Psychological well-being is sometimes thought of as a lack of mental illness. But, it is more than just a lack of something. It is a positive set of characteristics that lead to happy, well-adjusted life. These include the ability to be aware of and accept one’s strengths and weaknesses, to have goals that give meaning to life, to truly believe that your potential capabilities are going to be realized, to have close and valuable relations with others, the ability to effectively manage life issues especially daily issues, and the ability to follow personal principles even when opposed to society. These are also all characteristics that the great psychologist Abraham Maslow labelled self-actualization.

These are lofty goals that only few truly accomplish completely. But, we can strive to improve at each. Religion and spirituality encourage such personal growth. Indeed, spirituality appears to be associated with more positive attitudes toward physical and psychological difficulties and improved overall psychological well-being. For gay men, there can be a conflict between their religion and their sexual identity as “many religious/spiritual institutions continue to hold conservative and/or hostile attitudes toward same-sex behaviors.” As a result, the relationship between religion/spirituality and psychological well-being can be complicated for gay men.

In today’s Research News article “Psychological well-being among religious and spiritual-identified young gay and bisexual men.” See summary below or view the full text of the study at:

Meanley and colleagues study the relationship of religion and spirituality to psychological well-being in gay men. They recruited male gay men and transsexuals between the ages of 18 to 29 years to complete an on-line survey containing measures of religious commitment, participation, and coping, self-esteem, life purpose, internalize homophobia, and community stigma. Interestingly, 80% of the sample identified as religious and or spiritual.

As evidence that religion and spirituality can produce a conflict with sexual identity they found that participants who identified as religious/spiritual had significantly high internalized homophobia. Importantly, they also found that religiosity was associated with higher community stigma and internalized homophobia and lower purpose in life and self-esteem. But, on the other hand, spirituality was associated with higher purpose in life and self-esteem.

So, improve psychological well-being in gay men with spirituality.

“many homosexuals naturally embody the traits of sensitivity and gentleness that religion is intended to teach. Gay men are often saints and moral exemplars. In spite of the contrary examples that can be offered, there is a goodness and virtue that runs through gay men’s lives, and a demonstration of real spirituality in how many of us resolve the problem of making sense of religion in the modern world.” – Toby Johnson