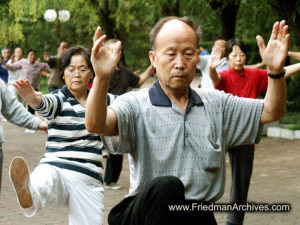 “Another great benefit of Tai Chi is that it’s accessible to people of all ages and fitness abilities. It’s the focus on the subtle movements that exercise the brain and boost cognitive abilities.” – Karl Romain

Human life is one of constant change. We revel in our increases in physical and mental capacities during development, but regret their decreases during aging. The aging process involves a systematic progressive decline in every system in the body, the brain included. This includes our mental abilities which decline with age including impairments in memory, attention, and problem solving ability. It is inevitable and cannot be avoided. Using modern neuroimaging techniques, scientists have been able to view the changes that occur in the nervous system with aging. In addition, they have been able to investigate various techniques that might slow the process of neurodegeneration that accompanies normal aging. They’ve found that mindfulness practices reduce the deterioration of the brain that occurs with aging restraining the loss of neural tissue. Indeed, the brains of practitioners of meditation and yoga have been found to degenerate less with aging than non-practitioners.

In today’s Research News article “Tai Chi Chuan and Baduanjin practice modulates functional connectivity of the cognitive control network in older adults.” See summary below or view the full text of the study at: https://www.ncbi.nlm.nih.gov/pmc/articles/PMC5294576/

Tao and colleagues study the effects of the mindful movement practices of Tai Chi and Baduanjin, a simplified version of Tai Chi, on neural systems and cognitive processes. They recruited older adults (50-70 years of age) and assigned them to 12 weeks of Tai Chi practice, Baduanjin practice, or health education. Before and after training, they were subjected to functional Magnetic Resonance Imaging (f-MRI) scanning of their brains and were measured for mental control.

These results are interesting and in line with prior findings that mindfulness practices alter the nervous system in regions responsible for higher mental processes. They demonstrate that mindful movement practices also do this and at the same time improve the individual’s ability to comprehend and maintain task demands over a period of time, mental control. These practices produce these changes in older individuals. This suggests that Tai Chi may be an effective practice to restrain cognitive decline in aging individual.

So, strengthen the brain to prevent aging cognitive decline with Tai Chi.