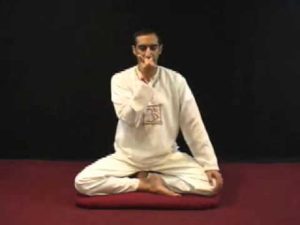 “Yoga breathing can help you manage the symptoms of both anxiety and depression. After years of meditating, and learning to observe my anxiety-based depression, I actually recovered from a condition that literally almost killed me. I regained and continue to maintain my optimum mental health with a yoga breathing practice.” – Amy Weintraub

Clinically diagnosed depression is the most common mental illness, affecting over 6% of the population. Major depression can be quite debilitating. It is also generally episodic, coming and going. Some people only have a single episode but most have multiple reoccurrences of depression.  Depression can be difficult to treat and usually treated with anti-depressive medication. But, of patients treated initially with antidepressant drugs only about a third attained remission of the depression. After repeated and varied treatments including antidepressant drugs, therapy, exercise etc. only about two thirds of patients attained remission. But, antidepressant drugs often have troubling side effects and can lose effectiveness over time. In addition, many patients who achieve remission have relapses and recurrences of the depression.

Being depressed and not responding to treatment or relapsing is a terribly difficult situation. The patients are suffering and nothing appears to work to relieve their intense depression. Suicide becomes a real possibility. So, it is imperative that other treatments be identified that can be applied when the typical treatments fail. Mindfulness training is another alternative treatment for depression. It has been shown to be an effective treatment for depression and is also effective for the prevention of its recurrence. Mindfulness Based Cognitive Therapy (MBCT) was specifically developed to treat depression and can be effective even in the cases where drugs fail. Aerobic exercise has also been found to relieve depression.

Yoga practice in many ways is ideal as it is both a mindfulness practice and an exercise and it can be practiced in groups or individually at home. It has also been shown to reduce depression. Yoga practice, though, is a combination of practices including postures, meditation, and breathing exercises. Hence, it is not clear which, or which combination of these components is effective for depression. In today’s Research News article “A Breathing-based Meditation Intervention for Patients with Major Depressive Disorder Following Inadequate Response to Antidepressants: A Randomized Pilot Study.” See summary below or view the full text of the study at:

They recruited patients diagnosed with a major depressive disorder who after at least 8 weeks of antidepressant drug treatment did not show a decrease or remission in their depression. The participants were then randomly assigned to either a wait-list control condition or to receive 8 weeks of yogic breathing exercise practice meeting in groups, once a week for 90 minutes and practiced daily at home for 20 to 30 minutes. The intervention consisted of a series of sequential, rhythm-specific breathing exercises that bring practitioners into a restful, meditative state. They were measured prior to and after the intervention and mid-course at 4-weeks into practice for anxiety, depression, suicidal ideation and behavior, medication compliance, and adverse effects.

They found that the yogic breathing group had high completion rates and no adverse effects. The intervention group, in comparison to the wait-list control group, had a highly significant, 44% decrease in clinician rated depression, and in self-rated anxiety and depression. Hence, yogic breathing exercises appeared to produce dramatic, clinically significant reductions in depression in patients who were unresponsive to antidepressant drug treatment.

These are interesting and exciting findings that simple breathing exercises with no side effects can produce clinically significant relief of antidepressant drug resistant major depressive disorder. It is remarkable that such a simple intervention can have such huge effects on a disorder that is exceedingly difficult to treat. It should be mentioned that the control condition did not receive and additional treatment. So, it is important that this pilot study be followed by a randomized controlled clinical trial that also includes other forms of active treatments such as relaxation or meditation training. This could help reduce confounding and to sort out which components of the yogic breathing exercise were effective.

“A powerful tool for preventing the onset of depressed moods in the first place, breath awareness restores energy during acute phases of depression, lightens your emotional load, and creates needed distance from gloomy thoughts. And it complements other healing strategies by providing an underpinning of relaxation and emotional stability.” – Rolf Sovic

To evaluate feasibility, efficacy and tolerability of Sudarshan Kriya yoga (SKY) as an adjunctive intervention in patients with major depressive disorder (MDD) with inadequate response to antidepressant treatment.

Patients with MDD (defined by DSM-IV-TR) depressed despite ≥8 weeks of antidepressant treatment were randomized to SKY or a waitlist control (delayed yoga) arm for 8 weeks. The primary efficacy end point was change in 17-item Hamilton Depression Rating Scale (HDRS-17) total score from baseline to 2 months. The key secondary efficacy end points were change in Beck Depression Inventory (BDI) and Beck Anxiety Inventory (BAI) total scores. Analyses of the intent-to-treat (ITT) and completer sample were performed. The study was conducted at the University of Pennsylvania between October 2014 and December 2015.

Results of this randomized, waitlist-controlled pilot study suggest the feasibility and promise of an adjunctive SKY-based intervention for patients with MDD who have not responded to antidepressants.