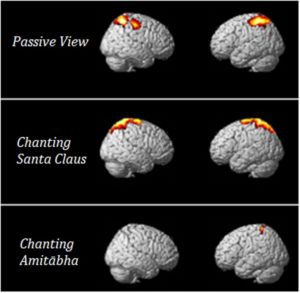 Alternative and Complementary techniques have been growing in acceptance and use over the last couple of decades. With good reason. They have been found to be beneficial for physical and mental health. Contemplative practices have been shown to improve health and well-being. These include mindfulness practices, meditation, yoga, mindful movement practices such as tai chi and qigong, and spiritual practices such as contemplative prayer. These practices, when engaged in over a period of time, have been shown to change brain structure and electrical activity relatively permanently in a process known as neuroplasticity.

Contemplative practices have also been shown to improve emotion regulation, allowing the practitioner to completely feel emotions but reducing the reactivity to them. Emotions, however are difficult to measure directly. One method to indirectly observe information processing in the brain is to measure the changes in the electrical activity that occur in response to specific stimuli. These are called event-related potentials or ERPs. The signal following a stimulus changes over time. The fluctuations of the signal after specific periods of time are thought to measure different aspects of the nervous system’s processing of the stimulus.

The N100 response in the ERP is a negative going response occurring around a tenth of a second following a visual stimulus presentation. The N100 response has been associated with the engagement of visual attention. So, the N100 response is often used as a measure of brain attentional engagement with the larger the negative change the greater the attentional focus. The late positive potential (LPP) response in the ERP is a positive going response occurring between 3 and 6 tenths of a second following stimulus presentation. The LPP response has been associated with the presence of emotional information. As such, these electrical responses can be used to measure the brains response to emotional laden stimuli and can perhaps measure brain process of emotion regulation.

In today’s Research News article “Repetitive Religious Chanting Modulates the Late-Stage Brain Response to Fear- and Stress-Provoking Pictures.” See summary below or view the full text of the study at: https://www.ncbi.nlm.nih.gov/pmc/articles/PMC5223166/

Gao and colleagues studied isolated chanting effects on emotion processing in the brain by recording event-related potentials, ERPs to emotion laden pictures while chanting. They recruited male and female adult, 42-50 years of age, Buddhists who had extensive experience with Buddhist chanting. They were presented with either neutral or emotionally negative pictures for 2 seconds while chanting for 20 seconds a religious chant, the word “Buddha”, or a secular chant, the words “Santa Claus”, or no chant. During each of the six, randomly presented conditions brain electrical activity was monitored with EEG electrodes and the electrical responses to the pictures was recorded (Event-Related Potentials, ERPs). To measure the physiological changes corresponding to negative emotions, electrocardiogram and galvanic skin response data were also collected.

These findings are interesting. Although the ERP is an indirect measure of brain activity to emotional stimuli, the late positive potential is associated with emotion regulation. The results suggest then that the smaller LPP response to emotionally negative pictures while chanting “Buddha”, is indicative of better emotion processing when engaged in a chant that has religious significance. Hence, the results suggest that religious chanting improves the important processes of regulating the responses to emotions. This suggests that spiritually significant activity may better prepare individuals to respond appropriately to their emotions.

So, modulate brain processing of emotions with religious chanting.

“The scans showed decreased blood flow to the parts of the brain that control emotion while chanting Om, when compared to another phrase. This suggests that the different forms of chanting prescribed in various mindfulness techniques (yoga or mindfulness meditation) can help manage negative emotions when practiced regularly.” – Pavitra Jayaraman

Chanting and praying are among the most popular religious activities, which are said to be able to alleviate people’s negative emotions. However, the neural mechanisms underlying this mental exercise and its temporal course have hardly been investigated. Here, we used event-related potentials (ERPs) to explore the effects of chanting the name of a Buddha (Amitābha) on the brain’s response to viewing negative pictures that were fear- and stress-provoking. We recorded and analyzed electroencephalography (EEG) data from 21 Buddhists with chanting experience as they viewed negative and neutral pictures. Participants were instructed to chant the names of Amitābha or Santa Claus silently to themselves or simply remain silent (no-chanting condition) during picture viewing. To measure the physiological changes corresponding to negative emotions, electrocardiogram and galvanic skin response data were also collected. Results showed that viewing negative pictures (vs. neutral pictures) increased the amplitude of the N1 component in all the chanting conditions. The amplitude of late positive potential (LPP) also increased when the negative pictures were viewed under the no-chanting and the Santa Claus condition. However, increased LPP was not observed when chanting Amitābha. The ERP source analysis confirmed this finding and showed that increased LPP mainly originated from the central-parietal regions of the brain. In addition, the participants’ heart rates decreased significantly when viewing negative pictures in the Santa Claus condition. The no-chanting condition had a similar decreasing trend although not significant. However, while chanting Amitābha and viewing negative pictures participants’ heart rate did not differ significantly from that observed during neutral picture viewing. It is possible that the chanting of Amitābha might have helped the participants to develop a religious schema and neutralized the effect of the negative stimuli. These findings echo similar research findings on Christian religious practices and brain responses to negative stimuli. Hence, prayer/religious practices may have cross-cultural universality in emotion regulation. This study shows for the first time that Buddhist chanting, or in a broader sense, repetition of religious prayers will not modulate brain responses to negative stimuli during the early perceptual stage, but only during the late-stage emotional/cognitive processing.