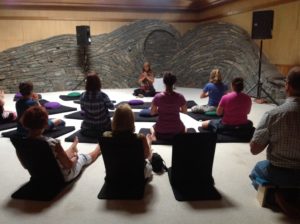 “Researchers globally are continuing to explore how telomerase activity can be a measure of the effects of psychological stress on physical health. As they study the different types of meditation in more detail and uncover more of the benefits for cell aging, we will gain a deeper understanding of the new-found link between mind and body health. In the meantime, it seems that any type of meditation can do some good for your longevity.” – Courtney Danyel

Meditation practice has been shown to improve health and longevity. One way it appears to act is by altering the genes which govern cellular processes in our bodies. One of the most fundamental of these processes is cell replication. Our bodies are constantly turning over cells. Dying cells or damaged are replaced by new cells. The cells turn over at different rates but most cells in the body are lost and replaced between every few days to every few months. Needless to say were constantly renewing ourselves.

As we age the tail of the DNA molecule called the telomere shortens. When it gets very short cells have a more and more difficult time reproducing and become more likely to produce defective cells. On a cellular basis this is what produces aging. There is an enzyme in the body called telomerase that helps to prevent shortening of the telomere. So, processes that increase telomerase activity tend to slow the aging process. Contemplative practice has been shown to increase telomerase activity thus helping to prevent cellular aging. It is thought that this protection of telomeres could protect the body’s cells from aging and deterioration and be the basis for the increased longevity in contemplative practitioners. So, it is important to further investigate the effects of contemplative practices on telomeres and telomerase.

or see summary below, Epel and colleagues studied the impact of a 5-day intensive meditation retreat on the genes associated with health and longevity. They compared two groups of people participating in a meditation retreat, novices and experienced meditators to a novel vacation control group which spent a comparable amount of time in a spa in the same location at the same time simply relaxing. The participants were measured before and after the retreat or vacation and 1-month and 12 months later for depression, stress, mindfulness, vitality, and blood was drawn for genetic analysis.

They found that all three groups showed significant improvements in depression, stress, mindfulness and vitality after the treatment, which was maintained 1-month later, while the novice meditators on the retreat maintained the improvements in depression and stress at the 10-month follow-up. There were marked changes in gene expressions that were present in all groups that included genes involved in the suppression of stress-related responses and immune function related to acute-phase wound healing and inflammation. Hence, the retreat and the vacation produced change in gene expressions that reflected lower stress, wounding, and inflammation, all of which signal improved health and well-being. In addition, the experienced meditator group showed increased expression for genes associated with healthy aging and in increased telomerase levels. Hence, meditation appears to promote healthy aging and longevity by protecting the telomeres from shortening which signals aging.

These are outstanding results and demonstrate that a week’s break either in the form of a meditation retreat or as a simple vacation produces improved mental health and vitality and decreased stress and gene expressions reflecting reduced stress and inflammation. This is a marked endorsement of the importance of a vacation to the individual’s health and well-being. But, the addition of meditation produces additional benefits which signal healthy aging and longevity. This is a marked endorsement of meditation retreat to not only improve current well-being but also to produce healthier aging.

So, improve cellular molecular health with a meditation retreat.

“At the retreat, the teacher warned us over and over not to look for major shifts in our lives when we got home. But my constellation of little changes seemed just evidence, really, that with continuous effort, I could change the way my mind worked. I could decouple, however briefly, my sense of self from the meat sack of mind and body. And that decoupling gave me the ability to actually control where that sack was headed next.” – Zoe Schlanger

Meditation is becoming increasingly practiced, especially for stress-related medical conditions. Meditation may improve cellular health; however, studies have not separated out effects of meditation from vacation-like effects in a residential randomized controlled trial. We recruited healthy women non-meditators to live at a resort for 6 days and randomized to either meditation retreat or relaxing on-site, with both groups compared with ‘regular meditators’ already enrolled in the retreat. Blood drawn at baseline and post intervention was assessed for transcriptome-wide expression patterns and aging-related biomarkers. Highly significant gene expression changes were detected across all groups (the ‘vacation effect’) that could accurately predict (96% accuracy) between baseline and post-intervention states and were characterized by improved regulation of stress response, immune function and amyloid beta (Aβ) metabolism. Although a smaller set of genes was affected, regular meditators showed post-intervention differences in a gene network characterized by lower regulation of protein synthesis and viral genome activity. Changes in well-being were assessed post intervention relative to baseline, as well as 1 and 10 months later. All groups showed equivalently large immediate post-intervention improvements in well-being, but novice meditators showed greater maintenance of lower distress over time compared with those in the vacation arm. Regular meditators showed a trend toward increased telomerase activity compared with randomized women, who showed increased plasma Aβ42/Aβ40 ratios and tumor necrosis factor alpha (TNF-α) levels. This highly controlled residential study showed large salutary changes in gene expression networks due to the vacation effect, common to all groups. For those already trained in the practice of meditation, a retreat appears to provide additional benefits to cellular health beyond the vacation effect

2 thoughts on “Improve Cellular Molecular Health with a Meditation Retreat”