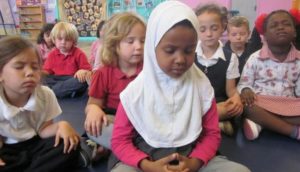 “Before we can teach a kid how to academically excel in school, we need to teach him how to have stillness, pay attention, stay on task, regulate, make good choices. We tell kids be quiet, calm yourself down, be still. We tell them all these things they need in the classroom, but we’re not teaching them how to do that.” – Jean-Gabrielle Larochette

Elementary school is an environment that has a huge effect on development. It is also an excellent time teach children the skills that will insure that the child has the ability to adaptively negotiate its environment. Mindfulness training in school, at all levels has been shown to have very positive effects. These include academic, cognitive, psychological, and social domains. Importantly, mindfulness training in school appears to improve the student’s self-concept.  Since, what occurs in these early years and in school can have such a profound, long-term effect on the child it is important to further study the impact of mindfulness training on the emotions, behavior, and self-concept of grammar school children.

or below or view the full text of the study at:

Crescentini and colleagues randomly assigned two 2nd grade classes of 7-8 year-old children to either receive mindful meditation training or emotion awareness training. The training occurred 3 days per week for 8 weeks. The periods were gradually increased in duration, from 10 minutes per day at the beginning of training to 30 minutes per day by the end of the 8-weeks. The mindful meditation training involved mindful breathing, mindfulness of body, and mindfulness of thoughts. The control condition of emotion awareness training occurred over similar time periods and consisted of reading and discussing a book on recognizing and experiencing emotions. Measures were taken before and after training from children’s self-reports of depression and by the evaluations of two teachers who not involved and blind to the training. The teachers rated the children on anxiety/depression, withdrawal/depression, somatic complaints, social problems, thought problems, attention problems, rule-breaking behavior, aggressive behavior, internalizing problems, and externalizing problems.

They found that both groups improved on their teacher ratings of total behavior problems and internalizing problems. The mindful meditation training also produced improvements in attention, restlessness/inattention, and attention deficit hyperactivity disorder scores. The children’s depression self-reports did not differ from pre-test to post-test and between trainings. These results indicate that mindful meditation training improved attention and ADHD type problems, and reduced internalizing problems.

It is important that mindfulness meditation training improved attentional skills. These are absolutely essential to classroom education and suggest that the training may produce improvements in academic performance. Improvements in attention are not surprising as meditation is in general an attentional training. It is also important that the meditation training reduced internalizing problems. This is important for the child’s development of a positive self-image. By not internalizing the child does not interpret everything that happens as a result of their own thoughts and behaviors. This then allows the child to develop a more accurate depiction of what they affect and what they don’t, developing a more accurate self-concept.

It is interesting that meditation training can be effective in children this young. Starting early in life while the individual is learning, developing, changing, and growing may be particularly important as an appropriate stage is set for positive psychological, emotional, and behavioral development.

“Studies of mindfulness programs in schools have found that regular practice — even just a few minutes per day — improves student self-control and increases their classroom participation, respect for others, happiness, optimism, and self-acceptance levels. It can help reduce absenteeism and suspensions too.” –  Katrina Schwartz

Mindfulness-based interventions are increasingly being used as methods to promote psychological well-being of clinical and non-clinical adult populations. Much less is known, however, on the feasibility of these forms of mental training on healthy primary school students. Here, we tested the effects of a mindfulness-meditation training on a group of 16 healthy children within 7–8 years of age from an Italian primary school. An active control condition focused on emotion awareness was employed on a group of 15 age-matched healthy children from the same school. Both programs were delivered by the same instructors three times per week, for 8 total weeks. The same main teacher of the two classes did not participate in the trainings but she completed questionnaires aimed at giving comprehensive pre-post training evaluations of behavior, social, emotion, and attention regulation skills in the children. A children’s self-report measure of mood and depressive symptoms was also used. From the teacher’s reports we found a specific positive effect of the mindfulness-meditation training in reducing attention problems and also positive effects of both trainings in reducing children’s internalizing problems. However, subjectively, no child in either group reported less depressive symptoms after the trainings. The findings were interpreted as suggestive of a positive effect of mindfulness-meditation on several children’s psychological well-being dimensions and were also discussed in light of the discrepancy between teacher and children’s reports. More generally, the results were held to speak in favor of the effectiveness of mindfulness-based interventions for healthy primary school children.

2 thoughts on “Improve Children’s Attention in School with Mindfulness”