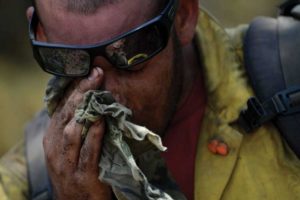 “I’m convinced [mindfulness] could be a powerful antidote to what I see happening to my peers, both as retirees and active personnel. We have high rates of suicide and PTSD. It can lead you to some pretty dark places.” – Gary Gonzalez

Experiencing trauma is quite common. It has been estimated that 60% of men and 50% of women will experience a significant traumatic event during their lifetime with 7%-8% of the population developing Post-Traumatic Stress Disorder (PTSD). It involves a number of troubling symptoms including reliving the event with the same fear and horror in nightmares or with a flashback. PTSD sufferers avoid situations that remind them of the event this may include crowds, driving, movies, etc. and may avoid seeking help because it keeps them from having to think or talk about the event. They often experience negative changes in beliefs and feelings including difficulty experiencing positive or loving feelings toward other people, avoiding relationships, memory difficulties, or see the world as dangerous and no one can be trusted. Sufferers may feel hyperarousal, feeling keyed up and jittery, or always alert and on the lookout for danger. They may experience sudden anger or irritability, may have a hard time sleeping or concentrating, may be startled by a loud noise or surprise.

First responders such as firefighters and police experience traumatic events as part of their jobs and many develop symptoms of PTSD. This is responsible for the fact that wore firefighters and police officers die by suicide than all line-of-duty deaths combined. 103 firefighters and 140 police officers died by suicide in 2017, compared to 93 firefighter and 129 officer line-of-duty deaths. Obviously, this is a troubling problem that needs to be addressed. There are a number of therapies that have been developed to treat PTSD. One of which, mindfulness training has been found to be particularly effective.  Indeed, mindfulness has been shown to has been shown to reduce suicidality and to reduce the impact of trauma on the individual.

It should be noted that these findings are correlations and thus there cannot be definitive conclusions about causation. Nevertheless, the results suggest that mindfulness is associated with lower Post-Traumatic Stress Disorder (PTSD) and lower risk of suicide among firefighters. In addition, being able to act with awareness and to experience feelings without judgement may be particularly strongly associated with a lower association between the symptoms of PTSD and the risk of suicide. These results suggest that a randomized clinical trial of the ability of mindfulness training to lower PTSD symptoms and suicide risk is warranted.

First responders have a tough job. They are not only exposed to immediate risks to their safety but also long-term risks associated with the trauma experienced in the course of their jobs. Mindfulness may be very helpful for firefighters. It may have the ability to help them withstand the long-term consequences of the trauma they experience. Perhaps mindfulness may make a tough, but important, job less costly for the firefighters mental health.

“Firefighters are more likely to die by suicide than to die on the job. We heavily invest in protective equipment to keep them physically safe – special masks, boots, jackets, pants. So why don’t we spend any money to protect their minds?” – Rich Landward

Posttraumatic stress disorder (PTSD) symptoms are associated with increased suicide risk among firefighters. Few studies have examined modifiable factors, such as mindfulness facets, that might attenuate this association. This study examined the interactive effects of PTSD symptoms and mindfulness facets in relation to suicide risk among firefighters.

Suicide prevention initiatives among firefighters, particularly those experiencing trauma‐related sequelae, might benefit from the inclusion of mindfulness‐based practices alongside frontline empirically‐supported approaches.