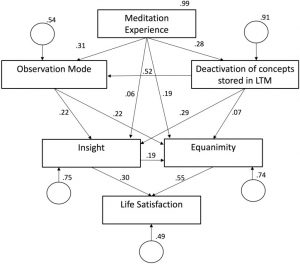 “Equanimity is a wonderful quality, a spaciousness and balance of heart. Although it grows naturally with our meditation practice, equanimity can also be cultivated in the same systematic way as mindfulness or compassion. We can feel this possibility of balance in our hearts in the midst of life when we recognize that life is not in our control.” – Insight Timer

Over the last several decades, research and anecdotal experiences have accumulated an impressive evidential case that the development of mindfulness has positive benefits for the individual’s mental, physical, and spiritual life. Mindfulness appears to be beneficial both for healthy people and for people suffering from a myriad of illnesses. It appears to be beneficial across ages, from children to the elderly. And it appears to be beneficial across genders, personalities, race, and ethnicity. The breadth and depth of benefits is unprecedented. There is no other treatment or practice that has been shown to come anyway near the range of mindfulness’ positive benefits.

In today’s Research News article “PROMISE: A Model of Insight and Equanimity as the Key Effects of Mindfulness Meditation.” (See summary below or view the full text of the study at: https://www.ncbi.nlm.nih.gov/pmc/articles/PMC6817944/), Eberth and colleagues investigate a proposed model of how meditation experience produces its benefits. They performed 2 studies. In the first, they interviewed experienced meditators asking them to identify and elaborate on things that they noticed had changed about themselves as a result of meditation.

From the reports they identified two principal factors that were altered. The first they labelled as equanimity which was a “reduced frequency and duration of emotional reactions, such as boredom, self-blame, anxiety, guilt, greed, envy, and many more.”  There is not a cessation of emotions but they “would recognize the emotion-evoking feature of the situation (e.g., praise or blame) but not experience a desire or resistance that would prolong or intensify the emotion.” The second factor they labelled as insight which were “convictional alterations that are accompanied by a subjective feeling of deep understanding and by changes in perception, judgment and/or behavior.” The interviews reflected that it was these changes that lead to positive changes in behavior and an alteration in the ideas of self.

In a second study they recruited experienced meditators and a control group of individuals who engaged in leisure time activities such as sorts, gardening, music, etc. They completed questionnaires measuring meditation practice, observation mode, including present moment attention and decentering; concept deactivation, including openness and acceptance; equanimity; insight; and life satisfaction.

They found that the meditators had significantly higher levels of all of the measured variables; observation mode, concept deactivation, equanimity, insight, and life satisfaction. They found that the greater the meditation experience the higher the levels of both facets of the observation mode, present moment attention and decentering, openness and acceptance, and insight. They then performed a path analysis which found that meditation practice leads to increases in observation mode and concept deactivation that in turn lead to increases in equanimity and insight that in turn lead to increased life satisfaction.

These results are very interesting and support a model of how meditation changes the underlying mental processing of the individual leading to positive effects on the individual’s lives. They postulated that meditation practice leads to becoming very observant of the present moment without becoming attached to it, and to becoming more open and accepting of events without conceptualizing them. These changes then alter the practitioner to better be able to regulate their emotions and to better understand the nature of reality. These alterations in the individual improves their ability to enjoy and appreciate their existence.

This is an interesting model that deserves further research attention. A better understanding of the mechanisms by which meditation practice improves the individual’s physical and mental health and their enjoyment of life can lead to improved and targeted meditation practices for the improvement of the individual’s physical, psychological, and spiritual well-being. This model is a good first step.

So, increase equanimity and insight thereby increasing well-being with meditation.

“Insight Meditation is a simple and direct way to “see things as they are,” free from distortion.” – Josh Summers

In a comprehensive meta-analysis on the effects of mindfulness meditation, Eberth and Sedlmeier (2012) identified a multitude of positive effects that covered a wide range of psychological variables, such as heightened mindfulness as measured through contemporary mindfulness scales, reduced negative emotions, increased positive emotions, changes in self-concept, enhanced attention, perception, and wellbeing, improved interpersonal abilities, and a reduction of negative personality traits. The present research aimed at developing and testing a comprehensive model explaining the wide range of mindfulness meditation effects and their temporal and causal relationships. In Study 1, interviews with meditators at different levels of experience were analyzed using a grounded theory procedure. The resulting model was triangulated and refined by concepts from both Western research and ancient Buddhist scriptures. The model developed highlights equanimity (reduction in emotional reactivity) and insight (alteration of cognitions) as the two key effects of mindfulness meditation that eventually lead to increased wellbeing. The model was pilot-tested with a large sample of meditators and non-meditators in Study 2. Data showed an acceptable fit with the model and indicated that meditators and non-meditators score significantly differently on the model’s core categories.