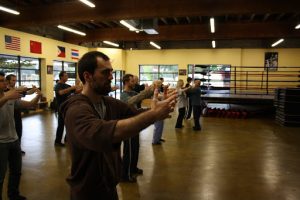 “Qigong is an extraordinary tool for reducing the harmful effects of stress. The three pillars of qigong practice are body, breath, and mind. If your body is relaxed your breathing will slow down. When your breath is slow, you feel more centered, more calm, and more in touch with yourself” – Kenneth Cohen

Tai Chi and Qigong are ancient mindfulness practices involving slow prescribed movements. They are gentle and completely safe, can be used with the elderly and sickly, are inexpensive to administer, can be performed in groups or alone, at home or in a facility or even public park, and can be quickly learned. In addition, they can also be practiced in social groups without professional supervision. This can make it fun, improving the likelihood of long-term engagement in the practice.

Tai Chi and Qigong are both mindfulness practices and gentle exercises. They have been shown to be beneficial for the health and well-being of individuals of a variety of ages, but particularly the elderly. They also improve the symptoms of a variety of diseases. One way that these practices may improve health and well-being is by reducing stress. The studies of the benefits for health of Tai Chi and Qigong are accumulating and so it makes sense to take a moment to summarize what has been learned about the benefits of Qigong practice.

In today’s Research News article “Individual Stress Prevention through Qigong.” (See summary below or view the full text of the study at: https://www.ncbi.nlm.nih.gov/pmc/articles/PMC7579037/ )  van Dam reviews and summarizes the published research studies of the effects of Qigong practice on stress. She reports that the published studies found that Qigong practice improves the cardiovascular system including a significant reduction in blood pressure and an increase in heartrate variability, an indicator of parasympathetic relaxation. It improves the respiratory system including increased lung capacity, oxygen intake and breathing patterns. It improves immune function and reduces inflammatory responses. It improves both psychological and physiological responses to stress. It improves sleep quality and reduces fatigue. It reduces depression and both acute and chronic anxiety.

These findings are remarkable and suggest that this gentle safe practice markedly improves the physical and mental well-being and health of the practitioners. Many of these benefits may result from the ability of Qigong practice to improve stress responding. Stress impairs health and well-being and Qigong practice appears to counteract these effects.

So, improve stress responding, health, and well-being with Qigong.

“Qi Gong helps you develop a crystal clear mind as you connect with the present moment, letting go of the stress of daily life and relaxing deeply.”- Nick Jankel

Owing to work intensification and an accelerated pace of life in general, individuals in many Western countries are often overactivated and find it difficult to switch off. However, recovery from physiological and mental activation is critical to prevent stress symptoms and maintain one’s physiological and mental well-being. Extensive research evidence indicates that Qigong, a traditional Chinese movement practice for promoting health, provides an effective means to recover from work and off-work demands. The main objective of this paper is to offer a comprehensive, narrative review of the effects of Qigong and its core components. Attention is first paid to the outcomes of work and off-work demands and stress, and the role of recovery for individuals’ well-being. Then, Qigong and its components are explained, followed by the results of scientific research. Finally, limitations and implications for research and practiced are discussed.

Improve Personality and Well-being with a Meditation Retreat

“Even if you’re terrified, even if you have no interest in being a monk and you’re not an extremist by nature, I know that sitting in silence for 10 days will blow your mind.” – MeiMei Fox

Retreat can be a powerful experience. But, in some ways, is like being on vacation. Everything is taken care of, beds made, towels and linens provided, all meals prepared, and time is dictated by a detailed schedule of meditations, talks, question and answer periods, and reflective time. All the individual has to do is show up, meditate, relax, contemplate and listen. The retreatants are terribly spoiled! That seeming ease, however, is deceptive. Retreat is actually quite difficult and challenging. It can be very tiring as it can run from early in the morning till late at night every day. It can also be physically challenging as engaging in sitting meditation repeatedly over the day is guaranteed to produce many aches and pains in the legs, back, and neck. But the real challenges are psychological, emotional, and spiritual. Retreat can be a real test.

Retreat isn’t all relaxation and fun. Far from it. The darkness can descend. During silent retreat, deep emotional issues can emerge and may even overwhelm the individual. Many participants will spontaneously burst out in tears. Others may become overwhelmed with fear and anxiety and break out in cold sweats, and still others are sleepless and tormented. How can this be, that something so seemingly peaceful as silent retreat can be so emotionally wrenching? The secret is that the situation removes the minds ability to hide and distract.

Humans have done a tremendous job of providing distractions for the mind including books, movies, magazines, music, television, sports, amusement parks, surfing the internet, tweeting, texting, etc. Any time troubling thoughts or memories of traumatic experiences begin to emerge in everyday life, the subject can easily be changed by engaging in a distraction. So, the issues never have to truly be confronted. But, in silent retreat there is no escape. Difficult issues emerge and there is no place to hide. They must be confronted and experienced. For some people this may be the first time in their entire life that they’ve had to directly face themselves and their darkest thoughts. It’s no wonder that retreat can be so wrenching.

With all these difficulties, why would anyone want to put themselves through such an ordeal and go on a meditation retreat? People go because retreat has many profound and sometimes life altering benefits. The benefits of retreat were investigated in today’s Research News article “Psychological Effects of a 1-Month Meditation Retreat on Experienced Meditators.” See:

or see summary below or view the full text of the study at:

Montero-Marin and colleagues recruited experienced meditators who participated in a 1-month Vipassana meditation retreat, with 8-9 hours of meditation and 1-2 hours of teaching each day, and compared them to a control group of experienced meditators matched on gender, age, ethnicity, educational, and type of meditation practice. They were measured before and after the retreat for non-attachment, decentering, mindfulness, loving kindness, compassion, joy, and acceptance toward both the self and others, positive and negative affect, satisfaction with life, temperament, and character.

They found that following the retreat participants, compared to controls, showed increased non-attachment, observing, mindfulness, positive-affect, balance-affect, and cooperativeness; and decreased describing, negative-others, reward-dependence and self-directedness. Employing a sophisticated statistical technique, they were able to show that non-attachment had a mediating role in decentring, acting aware, non-reactivity, negative-affect, balance-affect and self-directedness; and a moderating role in describing and positive others, with both mediating and moderating effects on satisfaction with life. Hence, attending a 1-month retreat produced improvements in non-attachment, which, in turn, produced improvements in mindfulness, positive emotions, temperament and character.

These are important results demonstrating the ability of participation in retreat to powerfully affect an individual beyond what is accomplished by long-term experience meditating. Concentrated practice over an extended period during retreat appears to magnify the effects of meditation, producing even greater positive benefits to the individual. Hence, even though retreat can be difficult, physically and emotionally, it is clear that its benefits, for many, far exceed its costs. This isn’t even considering the powerful spiritual experiences that can occur during retreat. This might account for the popularity of retreat and why it has been seen as an essential component of practice over hundreds of years.

So, improve personality and well-being with a meditation retreat.

“The retreat helped me realize that I’m full of desire, of longings for raw experience, and unbelievably controlling of how my life is lived. It sounds simple, but one week of silence may give you a hint, maybe more reliably than almost anything else, of who you are.” – Tim Wu

Background: There are few studies devoted to assessing the impact of meditation-intensive retreats on the well-being, positive psychology, and personality of experienced meditators. We aimed to assess whether a 1-month Vipassana retreat: (a) would increase mindfulness and well-being; (b) would increase prosocial personality traits; and (c) whether psychological changes would be mediated and/or moderated by non-attachment.

Results: Compared to controls, retreatants showed increases in non-attachment, observing, MINDSENS, positive-affect, balance-affect, and cooperativeness; and decreases in describing, negative-others, reward-dependence and self-directedness. Non-attachment had a mediating role in decentring, acting aware, non-reactivity, negative-affect, balance-affect and self-directedness; and a moderating role in describing and positive others, with both mediating and moderating effects on satisfaction with life.