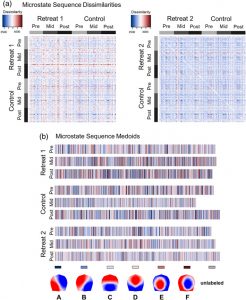 Meditation Alters the Brain in Conjunction with Alterations of Awareness

Mindfulness training has been shown through extensive research to be effective in improving physical and psychological health and particularly with reducing the physical and psychological reactions to stress. There are a number of ways that meditation practices produce these benefits, including changes to the brain and physiology. The nervous system changes in response to how it is used and how it is stimulated in a process called neuroplasticity. Highly used areas grow in size, metabolism, activity, and connectivity. Mindfulness practices in general are known to produce these kinds of changes in the structure and activity of the brain. In addition, meditation practice has been shown to result in attentiveness and serenity. There is little research, however, on how these changes in the brain produced by meditation are related to the changes in awareness in the practitioners.

In today’s Research News article “Meditation training modulates brain electric microstates and felt states of awareness.” (See summary below or view the full text of the study at: https://www.ncbi.nlm.nih.gov/pmc/articles/PMC8193519/) Zanesco and colleagues recruited healthy adults who had meditation experience and randomly assigned them to a wait-list control condition or to attend a 3-month Shambala residential meditation retreat with over 6 hours of meditation daily. They completed a daily experience questionnaire of positive and negative emotions and meditation experience. Before, in the middle and after the retreat the participants had their brain activity measured with electroencephalography (EEG).

These results document the increase in attentiveness and serenity and the quality of meditation that have been reported to occur over a meditation retreat. Significantly, they demonstrate that simultaneously there are changes in brain activity including a reduction in overall electrical activity and transient changes in electrical microstates in the brain over 40-120 microsecond intervals. Further the results demonstrate that reductions in these measures of brain electrical activity are correlated with improvements in attentiveness and serenity over the course of the retreat. This suggests that during a meditation retreat the brain becomes calmer and this is reflected in changes in subjective experience.

These results document that changes in the brain’s activities occur along with change in subjective experiences. The fact that they are correlated does no prove causation but is evidence in favor of causation. They suggest that during a meditation retreat there are changes produced in brain activity that produce greater attentiveness and serenity.

So, meditation alters the brain in conjunction with alterations of awareness.

““I think most people would agree their minds are just as important as their teeth. If we spent such a short time on our mind as we do on brushing our teeth, this world would be a different place,” Ritchie Davidson

Meditation practice is believed to foster states of mindful awareness and mental quiescence in everyday life. If so, then the cultivation of these qualities with training ought to leave its imprint on the activity of intrinsic functional brain networks. In an intensive longitudinal study, we investigated associations between meditation practitioners’ experiences of felt mindful awareness and changes in the spontaneous electrophysiological dynamics of functional brain networks. Experienced meditators were randomly assigned to complete 3 months of full‐time training in focused‐attention meditation (during an initial intervention) or to serve as waiting‐list controls and receive training second (during a later intervention). We collected broadband electroencephalogram (EEG) during rest at the beginning, middle, and end of the two training periods. Using a data‐driven approach, we segmented the EEG into a time series of transient microstate intervals based on clustering of topographic voltage patterns. Participants also provided daily reports of felt mindful awareness and mental quiescence, and reported daily on four experiential qualities of their meditation practice during training. We found that meditation training led to increases in mindful qualities of awareness, which corroborate contemplative accounts of deepening mental calm and attentional focus. We also observed reductions in the strength and duration of EEG microstates across both interventions. Importantly, changes in the dynamic sequencing of microstates were associated with daily increases in felt attentiveness and serenity during training. Our results connect shifts in subjective qualities of meditative experience with the large‐scale dynamics of whole brain functional EEG networks at rest.