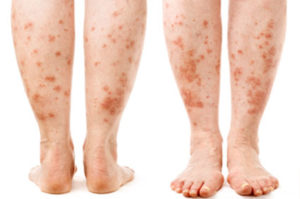 “There’s evidence that being mindful slows down the body’s inflammatory response and perhaps this is why it can be beneficial in psoriasis.” – Jo Jenkins

Psoriasis is a chronic skin condition where cells build up on the skin surface. This produces raised patches of skin with silver scales. It is a widespread disorder affecting about 3% of the world’s population and about 2 percent of the U.S. population. Psoriasis causes itchiness and irritation and may be painful. In severe cases, it can spread over large areas of the body. It increases the risk of other disorders such as psoriatic arthritis, diabetes, cardiovascular and kidney disease, and other autoimmune diseases. Psoriasis is an autoimmune disorder where the body’s immune system overreacts and attacks the body’s own tissue, in the case of psoriasis, it’s the skin.

Due to the negative self-image that skin diseases like psoriasis can produce, it often results in psychological problems, including anxiety, depression, social isolation, and negative ways of viewing the self, known as maladaptive schemas. These can become severe especially depression and possible suicide. It obviously markedly reduces the patient’s quality of life. There is no cure for psoriasis, but treatment can ease symptoms. But, there has not yet been developed an effective therapy targeted at the psychological symptoms of psoriasis patients. One potential treatment is to engage in therapy to change these schemas. Another potential approach is mindfulness training. It is potentially an effective treatment as psoriasis is an autoimmune disorder and mindfulness has been shown to improve the immune system and reduce the inflammatory response.

In today’s Research News article “Effects of the Schema Therapy and Mindfulness on the Maladaptive Schemas Hold by the Psoriasis Patients with the Psychopathology Symptoms.” See summary below or view the full text of the study at:

These are encouraging results that could lead to a therapeutic program to effectively treat the difficult psychological issues that are produced by psoriasis. Of course, more extensive randomized controlled clinical trails are needed to unequivocally establish the effectiveness of mindfulness training for these issues. But, such a development could greatly reduce the suffering of these patients.

So, help improve psychological problems associated with psoriasis with mindfulness.

This study aimed to compare the effects of the schema along with mindfulness-based therapies in the psoriasis patients.

This semi-experimental study with post- and pre-tests was conducted on the psoriasis patients in the Dermatology Clinic of the Isfahan Alzahra Hospital, Iran using the convenience sampling in 2014. The patients had a low general health score. The experimental groups included two treatment groups of schema-based (n = 8) and mindfulness (n = 8). Both groups received eight 90-min sessions therapy once a week; they were compared with 8 patients in the control group. To evaluate the psoriasis patients’ maladaptive schema, Young schema questionnaire was used. Data were analyzed through the covariance analysis test.

This study showed similar effects of both the schema and mindfulness-based therapies on the maladaptive schemas in improving the psoriasis patients with the psychopathologic symptoms.