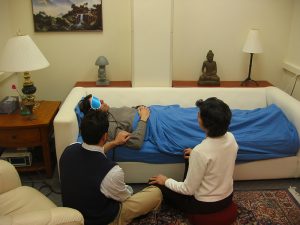 “in the right context, some people may experience psychedelic-like effects from placebos alone.” – Science News

have been used almost since the beginning of recorded history to alter consciousness and produce spiritually meaningful experiences. More recently hallucinogenic drugs such as MDMA (Ecstasy) and Ketamine have been similarly used. People find the experiences produced by these substances extremely pleasant. eye opening, and even transformative. They often report that the experiences changed them forever. Psychedelics and hallucinogens have also been found to be clinically useful as they markedly improve mood, increase energy and enthusiasm and greatly improve clinical depression.

Even though the effects of psychedelic substances have been experienced and reported on for centuries, only very recently have these effects come under rigorous scientific scrutiny. The setting in which psychedelic drugs are taken in the real world varies widely and there is little research on the effects of these settings on the experiences and their effects. The settings can set up strong participant expectancy (placebo) effects and there has been little research on the extent to which placebo effects can account for the reported benefits of psychedelic drug administration.

In today’s Research News article “A placebo-controlled study of the effects of ayahuasca, set and setting on mental health of participants in ayahuasca group retreats.” (See summary below or view the full text of the study at: https://www.ncbi.nlm.nih.gov/pmc/articles/PMC8233273/ ) Uthaug and colleagues recruited adults attending a ayahuasca retreat where they repeatedly ingested ayahuasca. At one point in the retreat the participants were randomly administered either ayahuasca or a placebo in a capsule form. They were measured before and the morning after the test session for empathy, ego dissolution, altered states of consciousness, anxiety, depression, perceived stress, somatization, and mindfulness.

They found that following both ayahuasca  or the placebo there were significant reductions in anxiety, depression, and perceived stress. The groups did not differ in ego dissolution. For the altered states of consciousness measures the ayahuasca group had higher levels of oceanic boundlessness, visual restructuralization, and insightfulness. But only insightfulness was significantly greater for the ayahuasca group compared to the placebo group.

These findings suggest that the psychological and altered states of consciousness effects of ayahuasca may be due to placebo effects. The study, however, was small with only 14 and 16 participants in the ayahuasca and placebo groups respectively. This provided only modest statistical power. There were a number of marginal effects which may have been significant had larger groups been used. In addition, the participants had repeated exposure to ayahuasca in the retreat environment prior to the placebo controlled test. This provided considerable conditioning that may explain the responses to the placebo.

The study, though, raises the question as to how much are the reported significant responses to psychedelic drugs due to participant expectancy (placebo) effects. Placebo effects can be quite powerful. Obviously, much more research is needed, particularly with larger numbers of participants and with the first administration of the psychedelic.

So, placebo effects may be strong in research on the effects of psychedelic drugs.

“Microdosing is the practice of regularly using low doses of psychedelic drugs. Anecdotal reports suggest that microdosing enhances well-being and cognition; however . . . benefits of microdosing can be explained by the placebo effect.” – Balázs Szigeti

Ayahuasca is a plant concoction containing N,N-dimethyltryptamine (DMT) and certain β-carboline alkaloids from South America. Previous research in naturalistic settings has suggested that ingestion of ayahuasca can improve mental health and well-being; however, these studies were not placebo controlled and did not control for the possibility of expectation bias. This naturalistic observational study was designed to assess whether mental health changes were produced by ayahuasca or by set and setting. Assessments were made pre- and post-ayahuasca sessions in 30 experienced participants of ayahuasca retreats hosted in the Netherlands, Spain, and Germany. Participants consumed ayahuasca (N = 14) or placebo (N = 16). Analysis revealed a main effect of time on symptoms of depression, anxiety, and stress. Compared to baseline, symptoms reduced in both groups after the ceremony, independent of treatment. There was a main treatment × time interaction on implicit emotional empathy, indicating that ayahuasca increased emotional empathy to negative stimuli. The current findings suggest that improvements in mental health of participants of ayahuasca ceremonies can be driven by non-pharmacological factors that constitute a placebo response but also by pharmacological factors that are related to the use of ayahuasca. These findings stress the importance of placebo-controlled designs in psychedelic research and the need to further explore the contribution of non-pharmacological factors to the psychedelic experience.