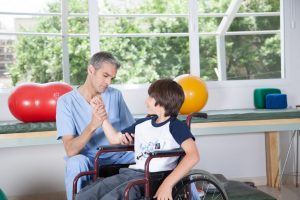 “It’s not just about the physical movement, although that can really benefit people. Yoga is more about the inner experience than the outer experience. For people who have disabilities, I focus on deep breathing and meditation. Even when a pose requires the use of muscles impacted by neuromuscular disease, I tell my students they can close their eyes and visualize the body part that won’t move the way they think it should.” – Chelsea Singer

Muscular dystrophy is a relatively rare inherited disease that damages and weakens muscles over time due to the lack of a protein called dystrophin, which is necessary for normal muscle function. The absence of this protein can cause problems with walking, swallowing, and muscle coordination. Eventually sufferers lose the ability to walk and require a wheelchair. Muscular dystrophy can occur at any age, but most diagnoses occur in childhood. Duchenne muscular dystrophy is the most common form in children occurring in 1 out of 3,500 births. The symptoms include trouble walking and standing, breathing difficulties, swallowing problems, and lung and heart weakness.

There is no cure for Duchenne muscular dystrophy. Drugs and surgery are used to slow progression and relieve symptoms. Respiratory problems are often treated with physiotherapy. Yoga practice has been shown to improve pulmonary function. It is not known, however, if yoga practice in addition to physiotherapy can help improve pulmonary function in children with Duchenne muscular dystrophy in children.

In today’s Research News article “Effect of Yoga and Physiotherapy on Pulmonary Functions in Children with Duchenne Muscular Dystrophy – A Comparative Study.” (See summary below or view the full text of the study at: https://www.ncbi.nlm.nih.gov/pmc/articles/PMC8191220/ ) Dhargave and colleagues recruited boys 5-10 years old who were diagnosed with Duchenne muscular dystrophy and randomly assigned them to receive daily physiotherapy or the combination of physiotherapy plus yoga for 1 year. Physiotherapy occurred at home for 45 minutes twice a day in the morning and afternoon. The yoga group received physiotherapy in the morning and 45 minutes of yoga in the afternoon, including postures and breathing exercises. They were measure before and after training and every 3 months during the year of training for pulmonary function.

They found that in comparison to baseline both groups had significant improvements in pulmonary function over the year of training including improvements in vital capacity, peak expiratory flow rate, maximum voluntary ventilation, and tidal volume during maximum voluntary ventilation. Hence, replacing one daily physiotherapy session with yoga produced equivalent improvements in pulmonary function to 2 daily physiotherapy sessions. Both of the programs increased the respiratory muscle strength, maintained the resilience of lung tissue, and improved the lung capacities. Hence, yoga practice can be employed to supplement physiotherapy in the treatment of children diagnosed with Duchenne muscular dystrophy.

So, improve lung function in children with Duchenne muscular dystrophy with physiotherapy and yoga.

“Although there is no cure, yoga can help to ease the symptoms of Muscular Dystrophy and improve quality of life. Yoga’s gentle movements in combination with pranayama (breathing techniques) can improve muscle tone and reduce pain, increasing the flow of oxygen, nutrients, and energy through the body, and enabling the more efficient expulsion of toxins.” – YogaClicks

Abnormal respiratory function is known to be detectable almost as soon as it can be measured reliably. Studies have identified the effect of respiratory muscle training as well as breathing exercises in improving pulmonary functions in children with Duchenne muscular dystrophy (DMD).

This study aims to identify the add-on effect of yoga over physiotherapy on pulmonary functions in children with DMD.

Pulmonary function test (PFT) was assessed before the intervention (baseline data) and at regular intervals of 3 months for a period of 1 year.

Normality was assessed using Shapiro–Wilk normality test. The baseline data were analyzed using Mann–Whitney U-test to identify the homogeneity. Repeated measures analysis of variance was used to assess significant changes in study parameters during the assessment of every 3 months, both within and between the two groups of patients.

A total of 88 participants completed all the 5 assessments, with a mean age of 7.9 ± 1.5 years. PFT parameters such as forced vital capacity (FVC), peak expiratory flow rate, maximum voluntary ventilation (MVV), and tidal volume during maximum voluntary ventilation (MVt) demonstrated significant improvements in Group I. In Group II, FVC and MVt significantly improved from baseline up to 1 year, whereas MVV improved from baseline up to 9 months. Tidal volume did not show any changes in both the groups.

The findings suggest that introduction of yoga with physiotherapy intervention at an early age can be considered as one of the therapeutic strategies in improving pulmonary functions in patients with DMD.