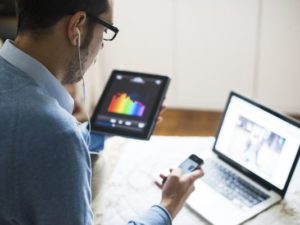 “What a balance: while multitasking makes it easier for your brain to succumb to distraction, meditation helps you recognize when you’ve gotten distracted—allowing you to get back to the task that’s top of mind.” – Drake Baer

In modern everyday life, we are constantly bombarded with a myriad of stimuli, from music, movies, TV, traffic noise, games, telephone calls, texts, emails, tweets, posts, etc. The generations who have grown up in the midst of this cacophony, claim to have developed multitasking skills, such that they can simultaneously work with multiple tasks and sources of information. At first glance they appear to have developed useful skills that the older generation can only marvel at. But, upon closer inspection of the abilities of the multitaskers, it has been found that they actually have impaired attentional abilities and are more easily distracted from what they’re doing. In other words, the multitasking has damaged their ability to focus on any one thing.

or below or view the full text of the study at: http://www.ncbi.nlm.nih.gov/pmc/articles/PMC4834474/

Gorman and Green test this notion. They measured college students’ media multitasking and selected a low multitasking group (at least one stand deviation below the mean) and a high multitasking group (at least one stand deviation above the mean). The two groups were then tested with a battery of four tests measuring attentional ability and distractibility. They were tested under two different conditions. In the mindfulness condition they interspersed the four tasks with 10 minutes of breath counting meditation. In the control condition, the four attention tasks were interspersed with 10 minutes of web browsing. They then looked at the effects of high vs. low multitasking and meditation vs. browsing practice on the interspersed attention tasks.

These are interesting and potentially significant findings. Given that the new generations are growing up as multitaskers with impaired attentional abilities and greater distractibility, it is heartening that meditation practice can to some extent repair the damage especially in the highest multitaskers. So, there is hope for these generations! But, these results are limited as they only show that mindfulness training can produce short-term improvements in attentional ability, it remains for future research to test whether longer-term training can have more long lasting effects.

So, improve attention in multitaskers with mindfulness.

“Through mind-body stress reduction programs with Aetna employees, we have demonstrated that mindfulness-based programs can reduce stress and improve people’s health. Healthier people are more productive and happier.” – Mark Bertolini

Recent research suggests that frequently switching between various forms of media (i.e. ‘media multitasking’) is associated with diminished attentional abilities, a disconcerting result given the prevalence of media multitasking in today’s society. In the present study, we sought to investigate the extent to which the deficits associated with frequent media multitasking can be temporarily ameliorated via a short-term mindfulness intervention previously shown to produce beneficial effects on the attentional abilities of normally functioning individuals. Consistent with previous work, we found: (1) that heavy media multitaskers showed generally poorer attentional abilities than light media multitaskers and (2) that all participants showed benefits from the short-term mindfulness intervention. Furthermore, we found that the benefits of the short-term mindfulness intervention were not equivalently large across participants. Instead, these benefits were disproportionately large in the heavy media multitaskers. While the positive outcomes were short-lived, this opens the possibility of performing long-term interventions with the goal of realizing lasting gains in this population.