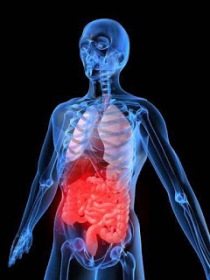 Irritable bowel syndrome (IBS) is the most common functional gastrointestinal (GI) disorder with worldwide prevalence rates ranging from 9–23%. In the U.S. the rates generally in the area of 10–15% affecting between 25 and 45 million people. IBS is not life threatening but it is very uncomfortable producing changes in bowel movement patterns, bloating and excess gas, and pain in the lower belly. It is also a major source of absenteeism both at work and in school. IBS is also associated with a marked reduction in the individual’s health quality of life, with disruption of the physical, psychological and social routines of the individuals. At present, there are no known cures for IBS and treatments involve symptomatic relief, often with fairly radical dietary changes.

The cause(s) of IBS are not known. But emotion dysregulation is suspected to be involved. It is clear that psychological stress exacerbates the illnesses and anxiety amplifies the symptoms. This suggests that mindfulness or the lack thereof may be involved as mindfulness is known to be helpful in reducing the psychological and physical responses to stress and mindfulness is known to improve emotion regulation. In addition, It has been shown that meditation and yoga can help relieve IBS symptoms.  So, it would make sense to further investigate the effectiveness of mindfulness training and emotion regulation for Irritable Bowel Syndrome (IBS).

In today’s Research News article “Comparing the Efficacy of Mindfulness-Based Stress Reduction Therapy with Emotion Regulation Treatment on Quality of Life and Symptoms of Irritable Bowel Syndrome.” (See summary below or view the full text of the study at: https://www.ncbi.nlm.nih.gov/pmc/articles/PMC6178327/ ), Ghandi and colleagues recruited patients with Irritable Bowel Syndrome (IBS) and randomly assigned them to receive either an 8-week, once a week for 90 minutes program of Mindfulness Based Stress Reduction (MBSR), Emotion Regulation group training, or a wait-list. The MBSR treatment consisted of body scan, meditation, and yoga practices and group discussion with homework. Emotion Regulation training consisted in training on “emotional awareness” and “acceptance”. The patients were measured before and after training and 2 months later for IBS severity and quality of life with IBS.

They found that both Mindfulness Based Stress Reduction (MBSR) and Emotion Regulation training produced significant improvements in IBS severity and the quality of life with IBS and that this effectiveness was maintained 2 months later. There were no significant differences in the effectiveness of MBSR and emotion regulation training. Hence, both MBSR and emotion regulation training produce large and lasting improvements in the symptoms of IBS and the quality of life of the patients.

“For a person who has IBS, mindfulness-based therapies are thought to help to reduce anxiety related to digestive symptoms. Due to our body’s natural stress response, such anxiety can actually exacerbate the very digestive symptoms that a person with IBS is most concerned about. The theory behind mindfulness-based therapies for IBS is that when you experience less reactivity to physical sensations related to your digestive system, you will experience less unwanted symptoms.” – Barbara Bolen

Objective: Irritable bowel syndrome is a common gastrointestinal disorder. The perception of stress and GI-speciﬁc anxiety play a key role in irritable bowel syndrome (IBS). The present study aims at comparing the efficacy of mindfulness-based stress reduction therapy with emotion regulation on the quality of life and severity in patients IBS.

Method : This randomized clinical trial was conducted in 3 phases: pretest, posttest, and follow-up. Follow-up was performed 2 months after the last intervention. The study population consisted of 24 IBS patients who were randomly selected according to Rome-IV Criteria and were then divided into 3 eight-member groups: (1) mindfulness-based stress reduction, (2) emotion regulation, and (3) control group. IBS-QOL34 and IBS-SSS were administered as assessment tools to all the 3 groups. The experimental groups were subjected to MBSR and ER psychotherapy, while the control group received no psychological intervention. After the 2-month follow-up, the 3 groups were evaluated again.

Results: The results revealed that MBSR improved the quality of life of IBS patients and dicreased severity of their condition. The findings of between and within subjects design revealed that the difference between MBSR and control groups was significant in IBS at follow-up (p = 0.01).

Conclusion: MBSR could be considered as a new, effective, and stable method in psychotherapy, in irritable bowel syndrome.

“The functional gastrointestinal disorders (FGIDs) are a group of more than 20 chronic and hard to treat medical conditions of the gastrointestinal tract that constitute a large proportion of the presenting problems seen in clinical gastroenterology.” – Jennifer Wolkin

The cause(s) of Functional Gastrointestinal Disorders are not known. But, emotion dysregulation is suspected to be involved. It is clear that psychological stress exacerbates the illnesses and anxiety amplifies the symptoms. This suggests that mindfulness or the lack thereof may be involved as mindfulness is known to be helpful in reducing the psychological and physical responses to stress and mindfulness is known to improve emotion regulation. In addition, contemplative practice has been shown to improve the symptoms of Irritable Bowel Syndrome. So, it would make sense to further investigate the relationship of mindfulness to emotion regulation, stress, and Functional Gastrointestinal Disorders.

The results support the contention that an inability to regulate emotions and stress are an important factor in Functional Gastrointestinal Disorders. In addition, they suggest that mindfulness is not only associated with lower levels of emotion and psychological stress but also with a greater ability to regulate these emotions. It should be noted that the results of this study are strictly observational and correlational and as such no conclusion about causation can be reached. But, the results give strong support to the need to perform a randomized controlled trial where mindfulness is trained and its effects on emotion regulation and Functional Gastrointestinal Disorders are measured.

With the caveat that causation hasn’t been established, it can be speculated that mindfulness training may be a safe and effective method for both the prevention and treatment of Functional Gastrointestinal Disorders. Mindfulness’ ability to improve emotion regulation may help the individual to be able to better experience emotions but respond to them in an effective and adaptive manner, lessening their impact. It remains for future research to investigate this exciting possibility.

So, improve gastrointestinal disorders with mindfulness.

“patients with heightened GI-specific anxiety may benefit from participation in a mindfulness programme as an adjunct to their usual clinical care.” – D. J. Kearney