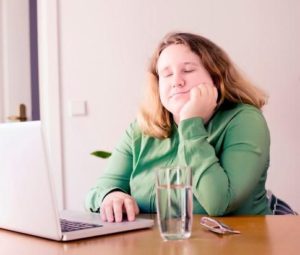 “So like with so many topics related to type 2 diabetes, insulin resistance can be avoided, and reversed, through living healthfully and mindfully.” – Defeat Diabetes Foundation

Type 2 diabetes is a common and increasingly prevalent illness that is largely preventable. One of the reasons for the increasing incidence of Type 2 Diabetes is its association with overweight and obesity which is becoming epidemic in the industrialized world. A leading cause of this is a sedentary life style. Unlike Type I Diabetes, Type II does not require insulin injections. Instead, the treatment and prevention of Type 2 Diabetes focuses on diet, exercise, and weight control. Recently, mindfulness practices have been shown to be helpful in managing diabetes. This suggests that mindfulness training may be able to reduce insulin resistance in adolescents at risk for Type II diabetes.

In today’s Research News article “One-Year Follow-Up of a Randomized Controlled Trial Piloting a Mindfulness-Based Group Intervention for Adolescent Insulin Resistance.” (See summary below or view the full text of the study at: https://www.frontiersin.org/articles/10.3389/fpsyg.2019.01040/full?utm_source=F-AAE&utm_medium=EMLF&utm_campaign=MRK_990182_69_Psycho_20190516_arts_A), Shomaker and colleagues recruited overweight and obese adolescent girls (12-17 years of age) with a family history of Type II Diabetes. They were randomly assigned to receive a 6-week program of either a mindfulness-based intervention (MBI) or a cognitive behavioral therapy (CBT) depression prevention. They were measured before and after the interventions and 1-year later for mindfulness, insulin resistance, depression, body size, and body fat.

They found that 1 year after the interventions only the mindfulness group had significant improvement in insulin resistance. Although both groups had significant decreases in depression, the mindfulness group had significantly greater decreases than the CBT group. These findings are consistent with prior findings by this research group. But these results demonstrate that the effectiveness of mindfulness training is lasting. This suggests that mindfulness training should be recommended for adolescent girls who are overweight and obese and with a family history of Type II Diabetes. This may prevent the onset of type II diabetes in this at-risk group.

So, produce long-term improvements in depression and insulin resistance in adolescents with mindfulness.

“Research shows that meditation actually helps the body regulate blood sugar by using insulin more efficiently. The stress hormone cortisol is a major contributor to insulin resistance, and meditation leads to lower cortisol levels, which in turn allows insulin to do its job properly.” – Avi Craimer

Discussion: One-year outcomes from this randomized, controlled pilot trial suggest that brief MBI may reduce depression and IR in at-risk adolescents. Replication and exploration of mechanisms within the context of a larger clinical trial are necessary. 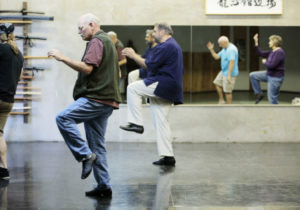 “One of the main issues that a stroke survivor experiences is a problem with balance. . .This is where tai chi can make a huge difference. With a complete focus on slow, controlled, and repetitive movements, tai chi is effective in improving one’s balance through dynamic motion and coordination”. Saebo

Every year, more than 795,000 people in the United States have a stroke and it is the third leading cause of death, killing around 140,000 Americans each year. A stroke results from an interruption of the blood supply to the brain, depriving it of needed oxygen and nutrients. This can result in the death of brain cells and depending on the extent of the damage produce profound loss of function. Strokes come in two varieties. The most common (87%) is ischemic stroke resulting from a blocked artery. But strokes can also occur due to leaking or rupture of a blood vessel in the brain, known as hemorrhagic stroke.

There are a number of risk factors for stroke that are unchangeable, such as family history, age, and genes. But there are a very large number of factors that are under our control including high blood pressure, smoking, high cholesterol, poor diet, sedentariness, and obesity. Given this list it is clear that basic physical fitness and exercise would be excellent for stroke prevention. The ancient mindful movement technique Tai Chi is a very safe form of gentle exercise that appears to be beneficial for stroke victims.

In today’s Research News article “Efficacy of Tai Chi and qigong for the prevention of stroke and stroke risk factors: A systematic review with meta-analysis.” (See summary below or view the full text of the study at: https://www.ncbi.nlm.nih.gov/pmc/articles/PMC5690748/ ),

Lauche and colleagues review, summarize, and perform a meta-analysis of the effects of Tai Chi or Qigong practice on risk factors for Stroke. They did not find any trials that reported actual incidence of stroke, but found 21 research controlled trials that reported on risk factors for stroke, including hypertension, hyperlipidaemia, diabetes, overweight or obesity, or metabolic syndrome.

They found that the published research reported that Tai Chi or Qigong practice produced significant improvement in hypertension including reductions in both systolic and diastolic blood pressure. The studies also reported significant improvements in hyperlipidaemia, including lower levels of triglycerides, and LDL cholesterol, and higher levels of HDL cholesterol and in diabetes including fasting blood glucose levels and insulin sensitivity. Tai Chi or Qigong practice was also found to improve the body weight index in overweight and obese individuals. No adverse events were reported in any of the trials.

These results are remarkable in the breadth and extent of the effects of Tai Chi or Qigong practice on risk factors for stroke. Although there were no direct measures of stroke incidence the reductions in risk factors would predict a reduction, over the long-term of the likelihood and incidence of stroke. Lauche and colleagues, however, caution that the trials tended to be of low quality with considerable risk of bias. Hence, conclusions need to be tempered and the results needs to be confirmed with more highly controlled trials.

The review found evidence that Tai Chi or Qigong practices are safe, with no negative effects or adverse reactions. In addition, they can be implemented to large numbers of individuals at relatively low cost, can be conveniently practiced at home or in a clinic, and can be practiced alone or in groups. Also, since the practice is gentle and safe it can be used with frail, sickly or elderly individuals. Hence, Tai Chi or Qigong practice appears to be an excellent treatment for the reduction of the risk for stroke in vulnerable individuals.

So, decrease stroke risk with Tai Chi or Qigong.

This review aims to summarize the evidence of Tai Chi and qigong interventions for the primary prevention of stroke, including the effects on populations with major stroke risk factors.

A systematic literature search was conducted on January 16, 2017 using the PubMed, Scopus, Cochrane Library, and CINAHL databases. Randomized controlled trials examining the efficacy of Tai Chi or qigong for stroke prevention and stroke risk factors were included. Risk of bias was assessed using the Cochrane Risk of Bias tool.