“There could not be a better time to learn mindfulness than during pregnancy and early motherhood. For one thing, this is a time when most people have a strong motivation to become the best person they can be in a relatively short period of time. When you realize the full enormity of the responsibility you have taken on by becoming a mom, the primary source of care for another whole human being, not to mention one that you love more than you thought you could ever love, there is a really high level of motivation to try your best to get yourself into the best mental and emotional shape possible.” – Cassandra Vieten

Mothers’ Day was basically invented and promoted by the greeting card and florist industries. But, even though its origins were crass, the idea took off, because it hit upon a truth; that we all love our mothers. As a result, Mothers’ Day has become a culturally accepted and encouraged time for the celebration of motherhood and all that it means. The deep bonds and love that virtually everyone feels for their mothers and their mothers for them fuels the celebration of the holiday.

Motherhood is ubiquitous. Everyone has a mother, who in turn, has had a mother, who has had a mother, etc. Many are, or want to be mothers. It plays an immensely important role in our individual and societal existence. The bond that develops between mother and child is a beautiful, virtually unbreakable, thing, perhaps the strongest bond between individuals that exists. It is essential for ensuring the nurturance that is mandatory for the life of the virtually helpless infant and the development of the child. The effectiveness, or lack thereof, of mothering has a major impact on the offspring that continue throughout their lives. It is such an important role that it seems reasonable to explore what goes into successful mothering and child rearing and what might be of assistance in improving mothering. There has accumulated a tremendous amount of scientific evidence that mindfulness, (“awareness that arises through paying attention, on purpose, in the present moment, non-judgementally”) can be an important asset for mothers, from conception, to pregnancy, birth, nurturing the infant, and childrearing and the mindfulness of the child can be an important asset for its development. So, on this day celebrating motherhood, we’ll explore the role of mindfulness.

Mothering does not occur in a vacuum. It’s been said that “It takes a village” to rear a child. Indeed, motherhood is embedded in a community. There are many people who are either directly or indirectly involved, from the father, to the extended family, the community, the medical profession, teachers, clergy, social workers, childcare workers, and even the government. So relationships become an essential part of mothering from conception, to birth, and family and social life. Mindfulness has been found to be important to becoming a mother in the first place. Mindfulness makes the individual more attractive to the opposite sex, it improves sexual relationships, it helps to relieve infertility, and it improves relationships in general. All of which underscores the importance of mindfulness in improving the likelihood that conception will occur and that childbirth will be born into a supportive social context.

Mindfulness continues to be helpful during pregnancy. It can help to relieve the anxiety and depression that commonly accompany pregnancy and even appears to benefit the neurocognitive development of the infant. After birth mindfulness continues to be of assistance as it improves caregiving and parenting, even in the case where the child has developmental disabilities. Mindfulness not only helps the parents deal with the stresses of childrearing, but developing mindfulness in the child can be of great assistance to helping the kids develop emotionally and cognitively, develop high level thinking, develop healthy self-concepts, develop socially, deal with stress, and cope with trauma and childhood depression. It even improves the child’s psychosocial development and academic performance and grades in school. In addition, it seems to be able to assist children through the troubled times of adolescence.

It should be clear that mindfulness is an important component of motherhood. Why would this be so? There are a number of reasons that mindfulness helps. It reduces the psychological and physical effects of stress on the mother and let’s face it, pregnancy, birth, caring for infants and raising children can be quite stressful. Mindfulness also improves emotion regulation making the mother better able to be in touch with her emotions yet react to them adaptively and effectively. Mindfulness helps the mother maintain her health and well-being, and to recover quicker should she become ill. After all, mothers can’t take sick leave or take vacations.

The essential capacity developed in mindfulness training is paying much greater attention to what’s occurring in the present moment. This can be of immense help to the mother. It makes her better attuned to her child’s and to her own needs. It reduces rumination and recriminations about past mistakes. It tends to diminish the worry and anxiety about the future. It helps her to focus on what needs to be done now, making her much more effective. And it helps her to experience the joys of motherhood to their fullest. In general, by focusing on now, she is tuned into the only time that matters for herself or her child, improving her relationship with reality, dealing with its problems and relishing its wonders.

Hence, mindfulness can make mothering better, both for the mother, and the child. So, on this important day of celebration of mothers, let’s adopt mindfulness and make it a part of our relationship with our mothers and our children. We may all love our mothers but we love mindful mothers even more especially when we ourselves are mindful.

“For me, the program gave me the freedom to be the kind of mom I wanted to be, instead of just reacting automatically. I still have difficult moments, and can get stressed out, but the mindfulness helps me stay centered and stay connected to myself and my baby.” – Cassandra Vieten 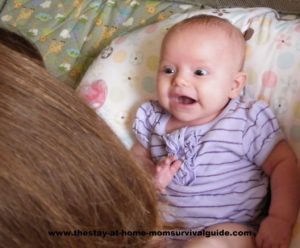 “If the mother is producing more stress hormones, they’re going to be transmitted to the fetus. Everything we do impacts the fetus. It’s kind of a marvelous thing. The fetus is getting information about what kind of a world it will be born into.” – Amy Beddoe

Pregnancy can be a time of heightened emotionality. This emotionality in the mother can affect the fetus. During pregnancy, the fetus is sensitive to the state of the mother and maternal anxiety can affect the fetus and continue to do so after birth. It has been demonstrated that mindfulness can help. Mindfulness training has been shown to improve anxiety and depression normally and to relieve maternal anxiety and depression during pregnancy. But, it is not known if mindfulness, independent of the mother’s psychological well-being, affects the fetus in utero and continues to do so after birth.

During the early development of the infant hearing and being attentive to sounds is important. In some species the first portions of the auditory system to develop are those tuned to the mother’s voice. Sounds are important cues to the infant of the state of the people around them and are signals of safety or potential danger. It is also important to language acquisition, as the first stage in learning to speak is hearing language in the environment. So, auditory attention is important to the development of the infant.

Van den Heuvel and colleagues measured mindfulness and anxiety levels in pregnant women during each trimester of their pregnancy and 10 months postpartum. Then at 9-months of age, the mothers’ newborn infants were tested for auditory event related potentials (ERPs). ERPs were recorded in response to a repetitive sound and to new different sounds infrequently inserted into the stream of sounds. To relax the infant during the recordings, they sat on their mothers’ lap.

The larger P150 wave suggests that the infants from mindful mothers were paying closer attention to the sounds and processing them more deeply while the smaller N250 wave suggests that the infants had reduced orientation to the sound. This indicates that they better recognized that they’ve heard this sound many times already. In contrast, the infants form mothers who were high in anxiety during pregnancy had larger N250 waves suggesting that they were overresponsive to repetitive stimuli. In addition, the infants of mindful mothers were not different in their responsiveness to a novel sound. These results further suggest that the infants of mothers who were mindful during pregnancy had more mature processing of sounds than infants whose mothers were low in mindfulness or high in anxiety.

These are remarkable results. The mother’s state of mindfulness during pregnancy not only affects the mother but positively affects the postnatal neural development of the infant. In contrast, the mothers state of anxiety during pregnancy negatively affects the postnatal neural development of the infant. The mechanisms of these effects are not known but it can be speculated that mindfulness’ ability to reduce the physiological and psychological responses to stress may produce greater calmness and relaxation in the mother during the difficult time of pregnancy and thereby reduce the stress on the infant. Conversely, high anxiety levels during pregnancy would be expected to heighten stress responses, negatively affecting the fetus. It will remain for future research to examine this hypothesis.

So, improve infants’ neurocognitive development with mindfulness during pregnancy.

“If I could choose only one tool you would take with you from . . . practice, it would be the capacity to be present. Being present forms the foundation for mindful motherhood. It’s the key to being a mindful mom. If being nonjudgmental, accepting, curious, and compassionate, and observing your experience and letting it be as it is without struggling against it are some of the rooms that make up the house of mindful motherhood, being in the present moment is the foundation of the house.” – Cassandra Vieten

Maternal anxiety during pregnancy has been consistently shown to negatively affect offspring neurodevelopmental outcomes. However, little is known about the impact of positive maternal traits/states during pregnancy on the offspring. The present study was aimed at investigating the effects of the mother’s mindfulness and anxiety during pregnancy on the infant’s neurocognitive functioning at 9 months of age. Mothers reported mindfulness using the Freiburg Mindfulness Inventory and anxiety using the Symptom Checklist (SCL-90) at ±20.7 weeks of gestation. Event-related brain potentials (ERPs) were measured from 79 infants in an auditory oddball paradigm designed to measure auditory attention—a key aspect of early neurocognitive functioning. For the ERP responses elicited by standard sounds, higher maternal mindfulness was associated with lower N250 amplitudes (P < 0.01, η2 = 0.097), whereas higher maternal anxiety was associated with higher N250 amplitudes (P < 0.05, η2 = 0.057). Maternal mindfulness was also positively associated with the P150 amplitudes (P < 0.01, η2 = 0.130). These results suggest that infants prenatally exposed to higher levels of maternal mindfulness devote fewer attentional resources to frequently occurring irrelevant sounds. The results show that positive traits and experiences of the mother during pregnancy may also affect the unborn child. Emphasizing the beneficial effects of a positive psychological state during pregnancy may promote healthy behavior in pregnant women.