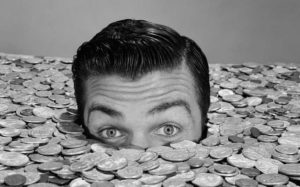 Improve Psychological Well-Being Regardless of Income with Mindfulness

“Contrary to what most of us believe, once we have enough to meet our basic needs, a higher income may not significantly increase our wellbeing and may even have a negative effect in some cases!” – University of Minnesotta

Income is only weakly related to happiness, satisfaction with life, and psychological well-being. Indeed, studies of happiness have shown that people with very low incomes are generally unhappy. Surprising, those who are quite rich tend to be generally unhappy. It’s the people in the middle, with sufficient, but not excessive income, who are generally the happiest. A surprising fact in this regard is that people who have won large amounts of money in the lottery afterward are much less happy than before.

In the U.S. as individual incomes rose over decades the percent of people considering themselves very happy fell and depression rose. Indeed, higher incomes are associated with higher levels of stress, increased likelihood of divorce, and less enjoyment of small activities. It is possible that a higher income may mean more work, less leisure time, and fewer strong social connections. In other words, the benefits of having more money might be offset by the sacrifices people are making in other aspects of wellbeing.

Mindfulness has been found to be associated with happiness and well-being. It is possible that mindfulness may affect the relationship between income and happiness, satisfaction with life, and psychological well-being. In today’s Research News article “Mindfulness as a Moderator in the Relation Between Income and Psychological Well-Being.” (See summary below or view the full text of the study at: https://www.ncbi.nlm.nih.gov/pmc/articles/PMC6099076/ ), Sugiura and colleagues recruited adult participants (aged 20 to 59 years) on-line and measured their income levels, mindfulness, satisfaction with life, and psychological well-being, including subscales for self-acceptance, environmental mastery, positive relations with others, personal growth, purpose in life, and autonomy.

So, improve psychological well-being regardless of income with Mindfulness.

“As much as income and well-being may be connected, it’s important not to give that link too much weight. How you live your live, the values you live by, the pleasures you take in the small moments of your life, your connections to the people important to you and your general outlook all have as much and likely more of an impact on your individual happiness.” – Christy Matta

The relation between income and life satisfaction has been found to be weak, albeit positive (r = 0.10–0.20). This study introduced psychological well-being (PWB) as a dependent variable predicted by income in addition to life satisfaction. Furthermore, individual differences might determine the strength of this relation, that is, act as moderators. Thus, this study introduced mindfulness as one such possible moderator. Participants (N = 800, 50% women, aged 20–59 years) completed an Internet questionnaire. Of them, 734 reported income and were included in the analyses. Income had weak, yet positive, zero-order correlations with life satisfaction and PWB (r = 0.13 and 0.11). Hierarchical regression controlling for demographics indicated that the relation between income and PWB was moderated by mindfulness facets. Specifically, among those low in not judging or describing of experiences, PWB was positively related to income. On the other hand, those high in these mindfulness dimensions indicated higher PWB irrespective of income.