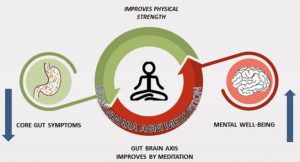 “Humans were never designed to be stressed out all the time, and when we learn to calm our nervous systems, our health improves dramatically. Our nervous system and the gut are inextricably linked.” – Buffy Owens

Stress affects gastrointestinal function. Short-term stress can produce a loss of appetite and slow digestion while long-term stress can produce heartburn, indigestion, nausea and vomiting, diarrhea, constipation and associated lower abdominal pain. Mindfulness is known to be helpful in reducing the psychological and physical responses to stress and contemplative practice has been shown to improve the symptoms of Irritable Bowel Syndrome and dyspepsia. In addition, mindfulness practices improve the intestinal bacteria that are important for digestion. So, it is likely that meditation practice would improve gastrointestinal health.

In today’s Research News article “Improvement in Gastrointestinal Quality of Life Index (GIQLI) following meditation: An open-trial pilot study in India.” (See summary below or view the full text of the study at: https://www.ncbi.nlm.nih.gov/pmc/articles/PMC8039347/ ) Kanchibhotla and colleagues recruited healthy adults and had them engage in daily 20-minute meditation for 50 days. The practice was a focused meditation on the gut region. They were measured before, at 24 days and after the intervention period for gastrointestinal quality of life divided into five domains: core symptoms, physical, psychological, social, and disease specific.

It should be kept in mind that this was a pilot study that lacked a comparison (control) condition leaving open a wide variety of confounding alternative interpretations such as expectancy effects, attention (Hawthorne) effects, experimenter bias, etc. But better controlled studies have reported that mindfulness improves gastrointestinal function. So, it is likely that in the present study the meditation practice improved gastrointestinal function. But future better controlled research is needed.

So, improve gastrointestinal health with meditation.

Medical science is increasingly recognizing the role of gut health in achieving optimal wellbeing. A healthy gut improves digestion. Additionally, it has a positive impact on multiple physiological networks such as immune system, central nervous system and hepato-endocrine system, thus contributing to the overall quality of life. Functional gastrointestinal disorders: also known as disorders of gut-brain interaction, such as irritable bowel syndrome are increasing worldwide. Conditions like stress, anxiety and mental disorders are correlated with these disorders. Mind-body interventions have been shown to ameliorate stress, anxiety and related conditions that may aggravate functional gastrointestinal disorders.

The present study aims to investigate the benefits of a novel meditation technique called the Vaishvanara Agni meditation (VAM) on the gastrointestinal quality of life.

54 subjects participated in the study and practiced VAM for 50 days. During the Vaishvanara Agni meditation (VAM), attention is directed to the navel region and the digestive system. The effect of the meditation was evaluated using the gastrointestinal quality of life (GI-QoL) questionnaire, which was administered to subjects at three different time points i.e. day 0, day 24 and day 50.

GI-QoL was significantly improved with the practice of VAM. Additionally, significant improvements were noticed in all sub domains especially core symptoms, physical strength and the psychological domain.

Meditation practices that focus on improving digestion can be an effective tool for improving gut health. 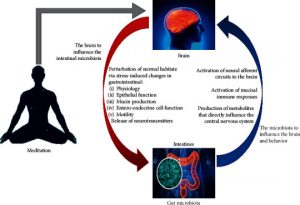 The cause(s) of Functional Gastrointestinal Disorders are not known. But emotion dysregulation is suspected to be involved. It is clear that psychological stress exacerbates the illnesses and anxiety amplifies the symptoms. This suggests that mindfulness or the lack thereof may be involved as mindfulness is known to be helpful in reducing the psychological and physical responses to stress and mindfulness is known to improve emotion regulation. In addition, contemplative practice has been shown to improve the symptoms of Irritable Bowel Syndrome.

In today’s Research News article “Long-Term Vegan Meditation Improved Human Gut Microbiota.” (See summary below or view the full text of the study at: https://www.ncbi.nlm.nih.gov/pmc/articles/PMC7358775/ ) Jia and colleagues recruited healthy long-term (over 3 years) vegan meditators and a group of omnivore nonmeditators. The groups were equivalent in gender, age, BMI, and most of the blood biochemical and blood routine indicators. Fecal samples were collected and subjected to 16S rDNA sequencing which measures bacteria present.

They found that the two groups were equivalent in fecal microbial diversity. The majority of the bacterial fell into 4 divisions, Firmicutes, Bacteroidetes, Actinobacteria, and Proteobacteria. Of those divisions the vegan meditators had significantly higher levels of Firmicutes and significantly lower levels of Actinobacteria, and Proteobacteria. They further found that there were 14 bacteria types that distinguished the groups with the vegan meditators having significantly higher levels. These bacteria types are associated with improved immunity, reduced inflammatory responses, changed intestinal endocrine activity, improved colon health, and reduced likelihood of colon cancer.

It should be kept in mind that the groups were naturally occurring groups and there was no random assignment. So, the groups might differ for reasons other than meditation and diet. In addition, the groups differed in both meditation and type of diet. It cannot be determined whether meditation or the vegan diet or the combination of both was responsible for the differences in intestinal bacteria. Nevertheless, the results suggest that a vegan diet and meditation may alter the intestinal flora to improve health.

Meditation has been widely used for the treatment of a variety of psychological, cardiovascular, and digestive diseases as well as chronic pain. Vegetarian diets can effectively prevent hypertension, metabolic diseases such as diabetes and obesity, and certain cancers. Meditation and vegetarian diets have been recognized as components of a healthy lifestyle and have therefore attracted more people around the world. Meditation can help regulate overall health through the neural-endocrine-immune network. Changes in dietary habits can affect the composition of the intestinal flora, which in turn affects human physiology, metabolism, nutrition, and immune function through the bacteria-intestine-brain axis. Here, we aimed to investigate the effect of long-term meditation and vegan diet on human intestinal flora.

The results showed that, compared with the subjects in the omnivorous healthy control group who had never received any meditation training, the intestinal flora structure in the people who followed the long-term vegan meditation practices changed significantly. The intersection set between the results of the LEfSe analysis and the Wilcoxon rank sum test includes 14 bacterial genera. These 14 genera are defined as the dominant genera, and the AUC value was 0.92 in the ROC curve, which demonstrates that the 14 genera can be used as a biomarker to distinguish the two groups. Three beneficial bacteria genera (Bifidobacterium, Roseburia, and Subdoligranulum) were significantly enriched in the meditation group with a threshold of 4, according to the LDAs. The functional prediction of differentially enriched intestinal flora showed that the metabolism of tyrosine, propionate, niacin, and nicotinamide in the intestinal micro-organisms in the meditation group was significantly reduced compared with those in the control group, while the biosynthesis of flavones, flavone alcohols, butosin, and neomycin; flavonoid-mediated oocyte maturation; cytoskeleton protein pathways; and antigen processing and presentation were significantly enhanced.

These results indicate that long-term vegan meditation plays a positive role in improving the body’s immunity and adjusting endocrine and metabolic levels, enabling the body to be in a state of good health. 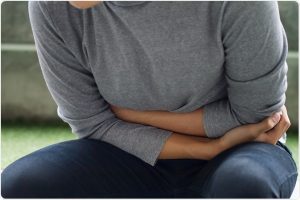 Functional Dyspepsia involves abdominal pain. Bloating, and nausea without a clear physical cause. It is often accompanied with anxiety. It is one of the most common digestive problems and affects 10% to 20% of the population. There is no cure. The symptoms are most frequently treated with over-the-counter medications such as antacids or anti-gas medications or even antidepressants. Stress is known to exacerbate dyspepsia. So, lifestyle changes are often recommended to reduce stress.

Mindfulness trainings have been shown to improve the physiological and psychological responses to stress and to reduce anxiety. They have also been shown to improve other digestive disorders such as irritable bowel syndrome (IBS). So, it is reasonable to investigate whether mindfulness training might be effective for functional dyspepsia.  Dialectical Behavior Therapy (DBT) is a mindfulness-based therapy that focuses on changing the thoughts and emotions that precede problem behaviors, as well as by solving the problems faced by individuals that contribute to problematic thoughts, feelings and behaviors. In DBT five core skills are practiced; mindfulness, distress tolerance, emotion regulation, the middle path, and interpersonal effectiveness. It is not known if functional dyspepsia can be effectively treated with DBT.

In today’s Research News article “Comparison of dialectical behavior therapy and anti-anxiety medication on anxiety and digestive symptoms in patients with functional dyspepsia.” (See summary below or view the full text of the study at: https://www.ncbi.nlm.nih.gov/pmc/articles/PMC7554546/ ) Tavakoli and colleagues recruited adults diagnosed with functional dyspepsia and continued them on antacid medication (pantoprazole ) and randomly assigned them to one of three groups, receiving either 8 weekly 2.5 hour sessions of Dialectical Behavior Therapy (DBT), an antianxiety medication (sertraline), or no further treatment. They were measured before and after treatment for dyspepsia symptom severity and anxiety.

These are interesting results that suggest that Dialectical Behavior Therapy (DBT) is effective for the treatment of the symptoms of functional dyspepsia including anxiety. But anti-anxiety medication is better at reducing anxiety levels. Since the mindfulness training of DBT does not require drugs with significant side effects, it would appear to be the preferred treatment for functional dyspepsia.

So, improve the health and well-being of patients with functional dyspepsia with mindfulness.

“Meditation works at all levels to aid the digestive process, making it one of the most effective natural remedies for indigestion.” – Beeja

Functional dyspepsia is a common chronic digestive disorder. The purpose of this study was to compare the effectiveness of dialectical behavior therapy and anti-anxiety medication in patients with functional dyspepsia.

The present study was a randomized, controlled clinical trial with sixty patients who were suffering from functional dyspepsia that identified by the ROME III criteria. Patients were divided into three groups by using pre- and posttest design, including Group A (dialectal treatment and pantoprazole), Group B (anxiolytic drug treatment and pantoprazole), and Group C (no intervention, only pantoprazole were used). The Beck Anxiety Inventory and the patient assessment of Gastrointestinal Symptom Severity Index Questionnaire were completed by the patients after receiving the written consent. Finally, the data were analyzed using the Statistical Package for the Social Sciences software version 20.

Dialectical behavioral therapy can be effective in reducing anxiety and improving the dyspepsia symptoms in patients with functional dyspepsia compared to anti-anxiety medication or conventional therapy. Therefore, communication between the physicians and psychologists and psychiatrists can have positive effects on the treatment of these patients.