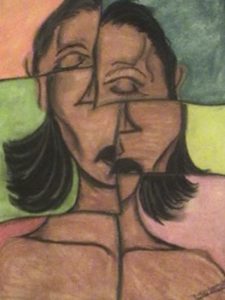 “It sounds elementary, I know. But that’s the beauty of it. Rather than wasting energy fighting dissociation, we can decrease its severity simply by increasing awareness.” – Holly Gray

Sometime during the lives of about 2% of the population, a Dissociative Disorder occurs. It is more likely in women than in men and is most frequently triggered by a traumatic event. Dissociative Disorders involve an involuntary escape from reality characterized by a disconnection between thoughts, identity, consciousness and memory. These can include significant memory loss of specific times, people and events, out-of-body experiences, such as feeling as though you are watching a movie of yourself, mental health problems such as depression, anxiety and thoughts of suicide, a sense of detachment from emotions, or emotional numbness, and a lack of a sense of self-identity.

There are three kinds of diagnosed Dissociative Disorders, Dissociative Amnesia, Depersonalization disorder, and Dissociative identity disorder (aka multiple personalities). These disorders are thought to be coping mechanisms for intense stress. They are generally treated with drugs, particularly antidepressants, and with psychotherapies including Cognitive Behavioral Therapy and Dialectical Behavioral Therapy. Mindfulness training has been found to be effective in treating a myriad of mental and physical disorders and particularly with stress related disorders. It has also been shown to be effective with trauma reactions including Post-Traumatic Stress Disorder (PTSD). So, it makes sense to test the effectiveness of mindfulness training in treating Dissociative Disorders.

In today’s Research News article “Role of mindfulness in Dissociative Disorders among adolescents.” See summary below or view the full text of the study at: https://www.ncbi.nlm.nih.gov/pmc/articles/PMC5100126/

Sharma and colleagues recruited a small sample of adolescents (average age = 13 and 86% female) who were diagnosed with a Dissociative Disorder. They were provided 6 weekly sessions of mindfulness training based upon the Mindfulness-Based Stress reduction (MBSR) program and encouragement to practice at home. The treatment included both sitting and walking meditation, body scan, yoga, and mindful eating practices. They were measured for dissociative experiences and mindfulness, before treatment, 3 weeks into treatment, and immediately after treatment.

They found that the treatment produced a significant, 54% decrease in dissociative symptoms and a 25% increase in mindfulness. The increase in mindfulness would be expected, given the extensive literature demonstrating increases in mindfulness produced by MBSR training. The decrease in dissociative symptoms is, to our knowledge, unprecedented. It is reasonable though given the demonstrated ability of mindfulness training to improve present moment awareness and decrease mind wandering. Attending to what is happening in the present moment would tend to counteract tendencies to drift away from reality.

These are potentially important results but should be looked upon as a pilot, proof of concept study. There was no control condition and the sample was small and confined to young adolescents, primarily girls. The results, though, provide a strong rationale to implement a large scale randomized controlled clinical trial. This could provide evidence that mindfulness training may be an effective treatment for dissociative disorders.

“Having a daily mindfulness practice allows you to reach trauma, implicit memories and a way of integrating your childhood abuse. You start with neutral judgements and work towards emotional charged memories. You can heal much quicker than you believe. It takes daily work strengthening your focus on the breath. It seems mundane to focus on the breath but the breath controls the nervous system and allows us to reach our trauma quickly and decisively.” – Marty

This and other Contemplative Studies posts are also available on Google+ https://plus.google.com/106784388191201299496/posts and Twitter @MindfulResearch

Context: Dissociation is understood as maladaptive coping and is common in children and adolescents. Treatment outcome studies show improvement in comorbid conditions suggesting the need to implement programs that target dissociative pathology.

Aim: To study the effect of practicing mindfulness among adolescents diagnosed with dissociative disorders.

Settings and Design: It was a hospital-based repeated measures design.

Materials and Methods: 7 adolescents participated in a mindfulness-based therapeutic program for 6 weeks.

Results: Participants were mostly female adolescents from rural, Eastern India. There was a significant reduction in dissociative experiences and significant improvement in mindfulness.