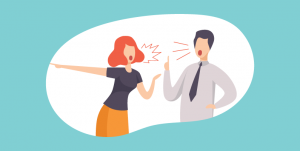 “Mindfulness, which has been shown to help mental, behavioral, and physical outcomes in both youth and adults, is a powerful tool that can help us respond to conflict in a non-reactive way.” – Whitney Stuart

Relationships can be difficult as two individuals can and do frequently disagree or misunderstand one another. These conflicts can produce strong emotions and it is important to be able to regulate these emotions in order to keep them from interfering with rational solutions to the conflict. In fact, it has been asserted that the inability to resolve conflicts underlies the majority of divorces. Mindfulness may be helpful in navigating disputes, as it has been shown to improve the emotion regulation and reduce the repetitive thinking about the conflict, rumination. Indeed, mindfulness has been shown to improve relationships. So, mindfulness training may improve the ability to resolve conflict

Attachment has been shown to affect the individual’s well-being. There are a variety of ways that individuals attach to others. The particular strategies are thought to develop during childhood through attachments to caregivers. They are secure, insecure, avoidant, ambivalent, fearful, preoccupied, and disorganized attachment styles. Secure attachment style is healthy and leads to positive development while all of the others are maladaptive and unhealthy. These can lead to psychological difficulties and interfere with the individual’s ability to relate to others and resolve conflict.

The relationships between attachment style, mindfulness, rumination, and conflict have not been previously studied. In today’s Research News article “Being in the Moment So You Can Keep Moving Forward: Mindfulness and Rumination Mediate the Relationship between Attachment Orientations and Negative Conflict Styles.” (See summary below or view the full text of the study at: https://www.ncbi.nlm.nih.gov/pmc/articles/PMC7559327/ ) Quickert and MacDonald recruited college students and had them complete measures of attachment orientation, experiential avoidance, relationship satisfaction, relationship mindfulness, romantic partner conflict styles, rumination, and mindfulness.

It should be noted that this study is correlational and as such causation cannot be determined. Also, only relatively young college students were employed which limits the generalizability of the results. Nevertheless, the study suggests thar insecure attachment is related to poor conflict styles and that relationship occurs because of insecure attachment’s relationships with higher rumination and lower mindfulness.

“Mindfulness skills have been shown to help with conflict management by decreasing self-centered focus, allowing for more collaborative dialogue, breaking the vicious cycle of automatic thoughts/feelings/behaviors that contribute to unproductive conversations, increasing emotional awareness of self and others, which promotes connection and understanding, strengthening attention and non-judgmental awareness, which can foster flexible and innovative problem-solving.” – Taylor Rush

Quickert, R. E., & MacDonald, T. K. (2020). Being in the Moment So You Can Keep Moving Forward: Mindfulness and Rumination Mediate the Relationship between Attachment Orientations and Negative Conflict Styles. International journal of environmental research and public health, 17(18), 6472. https://doi.org/10.3390/ijerph17186472