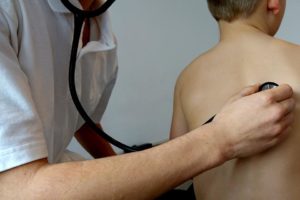 “A recent study . . .has found that exercising or practicing meditation can be an effective way to reduce acute respiratory infections. These infections, such as influenza, are incredibly common and can account for millions of doctor visits each year.” – To Your Health

Acute Respiratory Infections are infections that impair breathing. They involve infections of the sinuses, throat, vocal chords and lungs. They are produced by both viral infections such as colds, flu, and pneumonia, and bacterial infections such as streptococci and diphtheria. They can produce minor transitory symptoms or major, life-threatening diseases and are particularly serious for children, older people and people with immune system disorders. In fact, Acute Respiratory Infections are the third leading cause of death worldwide and are responsible for an estimated 4.25 million deaths per year.

Treatments for Acute Respiratory Infections, primarily drugs, address symptomatic relief. For bacterial infections antibiotics are frequently prescribed. It is primarily the role of the immune system to attack foreign viruses and bacteria. A weakened immune system then increases the likelihood of infection and reduces the ability to fight the infection. Mindfulness practices have been shown to improve immune system function. So, it would be expected that mindfulness practices such as meditation would improve the ability to fight off the causes of Acute Respiratory Infections.

In today’s Research News article “Meditation or exercise for preventing acute respiratory infection (MEPARI-2): A randomized controlled trial. PLoS ONE.” (See summary below or view the full text of the study at: https://www.ncbi.nlm.nih.gov/pmc/articles/PMC6014660/ ), Barrett and colleagues recruited meditation naïve adults who did not regularly exercise and who reported having at least one cold in the last year. Participants were then randomly assigned to receive either an 8-week Mindfulness-Based Stress Reduction (MBSR) program, a matched 8-week progressive exercise program, or to a no-treatment control condition. “Training classes in MBSR or EX were matched in terms of location, class time (2.5 hours per week), homework practice assigned (20 to 45 minutes per day).” MBSR contains meditation, yoga, and body scan practices and discussion.

Training occurred in September and October and weekly monitoring continued through May to maximize the likelihood of the participants being exposed to a cold virus. If they reported an Acute Respiratory Infection (ARI) during the monitoring period they were brought in for measurement and intensive monitoring during the ARI. They were measured for ARI severity, impact on quality of life, duration, absenteeism, health care utilization, and inflammatory biomarkers. They were also measured before and after training and twice more during the monitoring period for general physical and mental health, physical activity, perceived stress, sleep, self-efficacy, mindfulness, positive and negative emotions, social support, sense of feeling loved, Big 5 Personality characteristic, other illnesses, and social network and they provided blood and nasal samples.

The magnitude of the effects of MBSR and exercise training on colds was comparable to the magnitude of the effects of flu shots on influenza. So, the improvements were medical significant. It is quite impressive that mindfulness and physical activity both improve health and well-being and reduce Acute Respiratory Infections (ARI). So, mindfulness and exercise are good for the mental and physical health of the individual, including reducing the frequency and severity of colds.

So, improve acute respiratory infections (colds) with mindfulness and exercise.

Practice of meditation or exercise may enhance health to protect against acute infectious illness.

Community-recruited adults who did not regularly exercise or meditate.

Of 413 participants randomized, 390 completed the trial. In the MBSR group, 74 experienced 112 ARI episodes with 1045 days of ARI illness. Among exercisers, 84 had 120 episodes totaling 1010 illness days. Eighty-two of the controls had 134 episodes with 1210 days of ARI illness. Mean global severity was 315 for MBSR (95% confidence interval 244, 386), 256 (193, 318) for EX, and 336 (268, 403) for controls. A prespecified multivariate zero-inflated regression model suggested reduced incidence for MBSR (p = 0.036) and lower global severity for EX (p = 0.042), compared to control, not quite attaining the p<0.025 prespecified cut-off for null hypothesis rejection. There were 73 ARI-related missed-work days and 22 ARI-related health care visits in the MBSR group, 82 days and 21 visits for exercisers, and 105 days and 24 visits among controls. Viruses were identified in 63 ARI episodes in the MBSR group, compared to 64 for EX and 72 for control. Statistically significant (p<0.05) improvements in general mental health, self-efficacy, mindful attention, sleep quality, perceived stress, and depressive symptoms were observed in the MBSR and/or EX groups, compared to control.

Training in mindfulness meditation or exercise may help protect against ARI illness.