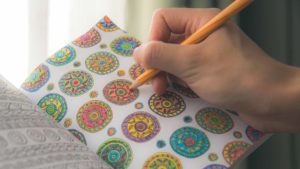 “Researchers have discovered that coloring activities help relax the amygdala – the section of the brain that is activated in situations where you feel stressed or scared. Simultaneously, coloring activates the parts of the brain that support creativity. . . those who colored in mandalas reported drastically decreased anxiety levels.” – Pocket Mindfulness

Recently, adult coloring books have become popular as a mindfulness practice. It is thought that immersion in the creative yet structured and safe process of coloring will increase mindfulness and in turn produce the benefits of mindfulness. Unfortunately, though, this assumption has not been adequately tested scientifically.

In today’s Research News article “When Did Coloring Books Become Mindful? Exploring the Effectiveness of a Novel Method of Mindfulness-Guided Instructions for Coloring Books to Increase Mindfulness and Decrease Anxiety.” (See summary below or view the full text of the study at: https://www.frontiersin.org/articles/10.3389/fpsyg.2018.00056/full?utm_source=F-AAE&utm_medium=EMLF&utm_campaign=MRK_536191_69_Psycho_20180208_arts_A ), Mantzios and Giannou recruited male and female undergraduate students and randomly assigned them to either color freestyle on a blank page or color a Mandala pattern for 10 minutes. They were measured before and after the coloring for anxiety and mindfulness. They found that this coloring exercise did not have a significant effect on either mindfulness or anxiety.

In a second experiment, with new participants, they repeated the same procedure for the Mandala coloring with either no instruction or the addition of mindfulness instructions during the coloring exercise, e.g. “Try to consciously observe the color transferring on the paper, the sensation of the pencil in your hand, your body sitting in the chair. Be aware of what happens moment to moment.” They found that the guided mandala coloring produced a significantly greater reduction in anxiety than the unguided coloring. There was, however, no effect on mindfulness. The participants indicated that the guidance was too distracting, suggesting a modification of the mindfulness guidance instruction in future research.

The results are an interesting start to empirically studying coloring as a means to produce mindfulness and the benefits of mindfulness. They are disappointed as they did not produce evidence that coloring increases mindfulness, even when instructions for coloring mindfully were included. There is a need to look at times of coloring longer than 10 minutes to explore whether greater practice could be effective. Nevertheless, the results suggest that coloring with a mindfulness instruction can reduce anxiety.

So, reduce anxiety by coloring mindfully.

“Just like meditation, coloring also allows us to switch off our brains from other thoughts and focus only on the moment, helping to alleviate free-floating anxiety.” – Kelly Fitzpatrick