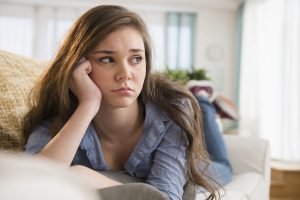 “mindfulness appears to be a way of engaging with our internal and external environment and approaching emotion that is an asset for avoiding excessively heightened internalizing symptoms.” – Sarah Clear

Adolescence is a time of mental, physical, social, and emotional growth. But it can be a difficult time, fraught with challenges. During this time the child transitions to young adulthood; including the development of intellectual, psychological, physical, and social abilities and characteristics. There are so many changes occurring during this time that the child can feel overwhelmed and unable to cope with all that is required. This can lead to emotional and behavioral problems. Indeed, up to a quarter of adolescents suffer from internalizing symptoms such as depression or anxiety disorders, and an even larger proportion struggle with subclinical symptoms. Mindfulness training has been shown to improve emotion regulation and to benefit the psychological and emotional health of adolescents

In today’s Research News article “Longitudinal Associations between Internalizing Symptoms, Dispositional Mindfulness, Rumination and Impulsivity in Adolescents.” (See summary below or view the full text of the study at: https://www.ncbi.nlm.nih.gov/pmc/articles/PMC8416885/ ) Royuela-Colomer and colleagues recruited healthy adolescents (aged 11 to 17 years) and had them complete measures of mindfulness, rumination, impulsivity, and internalizing symptoms, including anxiety, depression, and perceived stress. The measures were completed again one year later.

These findings are correlational. So, no conclusions about causation can be made. But in previous controlled studies mindfulness has been found to improve the psychological well-being of adolescents and to produce lower levels of depression, perceived stress, and impulsivity. So, the correlations obtained here likely occurred due to causal connections between the variables. These results then suggest that mindfulness may be protective against internalizing symptoms and impulsivity in adolescents. This further suggests that mindfulness training should be made part of the education of adolescents to improve their psychological well-being and reducing their destructive tendencies toward impulsive behavior.

So, reduce adolescent internalizing symptoms, and impulsivity with mindfulness.

“Mindfulness not only directly impacted on adolescents’ internalizing problems, but also indirectly improved their anxious and depression emotions via the reduction of rumination and the increase of acceptance.” – Meng Yu