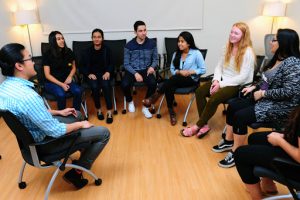 Improve Anxiety and Depression with an Abbreviated Mindfulness-Based Cognitive Therapy

“People at risk for depression are dealing with a lot of negative thoughts, feelings and beliefs about themselves and this can easily slide into a depressive relapse. MBCT helps them to recognize that’s happening, engage with it in a different way and respond to it with equanimity and compassion.” – Willem Kuyken

In today’s Research News article “A Brief Mindfulness-Based Cognitive Therapy (MBCT) Intervention as a Population-Level Strategy for Anxiety and Depression.” (See summary below or view the full text of the study at: https://www.ncbi.nlm.nih.gov/pmc/articles/PMC8057287/ )  Burgess and colleagues recruited adult patients with an anxiety or mood disorders and provided them with 5 weekly 2-hour group based session of Mindfulness-Based Cognitive Therapy (MBCT) with daily home practice. The group size was larger than the typical MBCT program (i.e., 16–20 participants rather than 12 participants) and meditation practice was reduced to 10-15 minutes compared to the traditional 40 minutes. They were measured before and after training for anxiety, depression, self-compassion, perceived stress, mental well-being, and disability.

It should be noted that there was no control condition in the present study. But previous controlled studies have routinely demonstrated that Mindfulness-Based Cognitive Therapy (MBCT) produces significant improvements in anxiety, depression, worry, distress, self-compassion, and mental well-being. So, the present results are unlikely to be due to confounding factors. The present study demonstrates that the significant benefits of MBCT can be produced with an abbreviated program delivered to a large group. This reduces the amount of time clinicians have to devote to the program, thereby reducing cost. It would also be likely that the abbreviated program would improve adherence to the program requirements and reduce drop-outs. This allows more patients at lower cost to have their suffering reduced.

So, improve anxiety and depression with an abbreviated Mindfulness-Based Cognitive Therapy.

“Mindfulness-Based Cognitive Therapy (MBCT) is designed to help people who suffer repeated bouts of depression and chronic unhappiness. It combines the ideas of cognitive therapy with meditative practices and attitudes based on the cultivation of mindfulness. The heart of this work lies in becoming acquainted with the modes of mind that often characterize mood disorders while simultaneously learning to develop a new relationship to them.” – MBCT.com

Mindfulness-based interventions (MBIs) have emerged as clinically effective interventions for anxiety and depression although there are significant barriers to their access in the general population. The present study examined the effectiveness of a 5-week abbreviated mindfulness-based cognitive therapy (MBCT) intervention for a physician-referred, treatment-seeking, community sample (N = 54) with mood and/or anxiety symptom burden. Treatment effects demonstrated significant reductions in mood and anxiety symptom severity and significant increases in general well-being. Observed effect sizes were generally large, with high response and remission rates. The present study offers preliminary support that an abbreviated MBCT protocol can offer large treatment effects for decreasing mood and anxiety symptoms and could potentially offer an effective population-level strategy to improve cost-effectiveness and access to care.