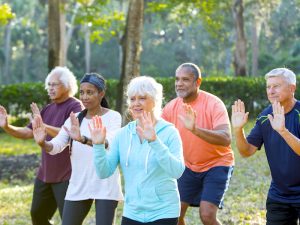 “Diet and exercise are the cornerstone of diabetes management. People with diabetes who exercise regularly have better control over their blood glucose levels and fewer complications such as heart disease and stroke. Many people, however, are unable to keep up with their regular exercise because they either don’t enjoy it, or have a problem finding time to exercise. Tai chi offers a major advantage: It’s enjoyable, and to many, it’s almost addictive.“ – Paul Lam

Type 2 diabetes is a common and increasingly prevalent illness that is largely preventable.

One of the reasons for the increasing incidence of Type 2 Diabetes is its association with overweight and obesity which is becoming epidemic in the industrialized world. A leading cause of this is a sedentary life style. Current treatments for Type 2 Diabetes focus on diet, exercise, and weight control. Recently, mindfulness practices have been shown to be helpful in managing diabetes. Mindful movement practices such as Tai Chi and Qigong  are mindfulness practices that are also gentle exercises that appear to improve type 2 diabetes.

In today’s Research News article “Effects of fitness qigong and tai chi on middle-aged and elderly patients with type 2 diabetes mellitus.” (See summary below or view the full text of the study at: https://www.ncbi.nlm.nih.gov/pmc/articles/PMC7746158/ ) Li and colleagues recruited sedentary adults over 40 years of age who were diagnosed with type 2 diabetes and who did not practice Tai Chi or Qigong. They were randomly assigned to receive 60 minutes of practice, 5 times per week for 12 weeks of either fitness qigong, Tai Chi, or stretching exercise. They were measured before and after training for body size and blood samples were taken and assayed for fasting plasma glucose, glycated hemoglobin (HbA1C), and C-peptide levels.

These are interesting but disappointing results that suggest that neither Tai Chi nor Qigong practice improve blood glucose levels in patients with type 2 diabetes. Furthermore, Tai Chi appears to increase HbA1C levels particularly in overweight patients suggesting poorer glucose regulation. In contrast patients who have had type 2 diabetes for a long period of time appear to benefit from Qigong practice.

These are complex results that do not fit with prior findings by other researchers that Tai Chi and Qigong practices improve type 2 diabetes. It may be due to relatively small sample sizes. One possibility is the comparison condition employed, active stretching. Many prior research studies compared Tai Chi and Qigong practice to treatment as usual groups that do not control for participant expectancy, experimenter bias, and attentional effects. It is possible that in comparison to a stronger active control condition these practices do not show benefit. This would suggest that any active practice might produce benefits for sedentary patients with type 2 diabetes.

“Tai Chi can prompt a declination in blood glucose levels, perhaps by improving blood glucose metabolism, prompting a decrease in the inflammatory response. . . the exercise may boost levels of fitness along with a feeling of well being — this in turn may boost the health of the immune system.” – Anna Sophia McKenney

Currently, qigong and tai chi exercises are the two most common preventive as well as therapeutic interventions for chronic metabolic diseases such as type 2 diabetes mellitus (T2DM). However, the quantitative evaluation of these interventions is limited. This study aimed to evaluate the therapeutic efficacy of qigong and tai chi intervention in middle-aged and older adults with T2DM. The study included 103 eligible participants, who were randomized to participate for 12 weeks, in one of the following intervention groups for the treatment of T2DM: fitness qigong, tai chi, and control group. Three biochemical measures, including fasting plasma glucose (FPG), glycated hemoglobin (HbA1C), and C-peptide (C-P) levels, assessed at baseline and 12 weeks, served as the primary outcome measures. During the training process, 16 of the 103 participants dropped out. After the 12-week intervention, there were significant influences on HbA1C (F2,83 = 4.88, p = 0.010) and C-P levels (F2,83 = 3.64, p = 0.031). Moreover, significant reduction in C-P levels was observed after 12-week tai chi practice (p = 0.004). Furthermore, there was a significant negative correlation between the duration of T2DM and the relative changes in FPG levels after qigong intervention, and the relative changes in HbA1C levels were positively correlated with waist-to-height ratio after tai chi practice. Our study suggests that targeted qigong exercise might have a better interventional effect on patients with a longer duration of T2DM, while tai chi might be risky for people with central obesity.