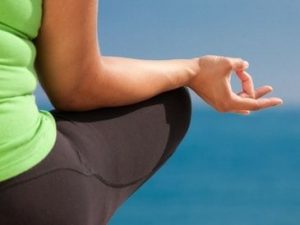 “patients with obesity do better at reducing stress with mindfulness exercises.” – Sharon Basaraba

In today’s Research News article “A Randomized Controlled Trial of a Mindfulness-Based Weight Loss Intervention on Cardiovascular Reactivity to Social-Evaluative Threat Among Adults with Obesity.” (See summary below or view the full text of the study at: https://www.ncbi.nlm.nih.gov/pmc/articles/PMC7138245/ ) Daubenmeir and colleagues recruited adults with abdominal obesity (BMI>30) and provided them with a 12-week program of diet and exercise. Half were randomly assigned to also receive mindfulness training similar to the Mindfulness-Based Stress Reduction (MBSR) program. In previously reported results, the mindfulness training produced greater improvements in metabolism but non-significant improvements in body weight.

In the present study they report the results of studies of the obese participants stress responsivity. They were measured before and after the 12-week diet and exercise training with a social stress test that involved giving a speech and verbally doing math problems while being evaluated by strangers. In addition, cardiovascular factors were measured including the electrocardiogram (EKG), blood pressure and cardiac impedance.

These results suggest that mindfulness training increases the obese individual’s ability to adapt psychologically and physiologically to stress. That mindfulness reduces anxiety and improves adaptation to stress has been previously reported using different evaluation techniques and different participant populations. The present study extends these findings by demonstrating that mindfulness has similar benefits for the obese. Since stress reactivity can be a particular problem for the obese, the improved adaptive responses to stress after mindfulness training may be especially helpful for these individuals.

So, improve obese individuals’ ability to respond adaptively to stressors with mindfulness.

Adults (N=194) with obesity were randomized to a 5.5-month mindfulness-based weight loss intervention or an active control condition with identical diet-exercise guidelines. Participants were assessed at baseline and 4.5 months later using the Trier Social Stress Task. Electrocardiogram, impedance cardiography, and blood pressure were acquired at rest and during the speech and verbal arithmetic tasks to assess pre-ejection period (PEP), CO, and TPR reactivity.

Mindfulness participants showed significantly greater maintenance of challenge-related emotions and cardiovascular reactivity patterns (higher CO and lower TPR) from pre to post-intervention compared to control participants, but groups did not differ in PEP. Findings were independent of changes in body mass index.

Mindfulness training may increase the ability to maintain a positive outlook and mount adaptive cardiovascular responses to repeated stressors among persons with obesity though findings need to be replicated in other populations and using other forms of mindfulness interventions.