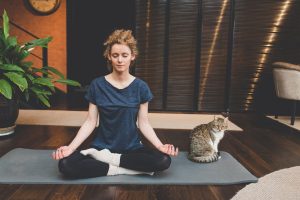 “mindfulness meditation had “a significant and large effect” on OCD symptoms, specifically on thought-action fusion (again, the belief that having a thought is the same as acting on the thought), and the ability to “let go” of unwanted thoughts.” – Jon Hershfield

Obsessive-Compulsive Disorder (OCD) sufferer have repetitive anxiety producing intrusive thoughts (obsessions) that result in repetitive behaviors to reduce the anxiety (compulsions). In a typical example of OCD, the individual is concerned about germs and is unable to control the anxiety that these thoughts produce. Their solution is to engage in ritualized behaviors, such as repetitive cleaning or hand washing that for a short time relieves the anxiety. The obsessions and compulsions can become so frequent that they become a dominant theme in their lives. Hence OCD drastically reduces the quality of life and happiness of the sufferer and those around them. About 2% of the population, 3.3 million people in the U.S., are affected at some time in their life.

Fortunately, OCD can be treated and mindfulness training has been shown to be effective in treating OCD.

In today’s Research News article “Kundalini Yoga Meditation Versus the Relaxation Response Meditation for Treating Adults With Obsessive-Compulsive Disorder: A Randomized Clinical Trial.” (See summary below or view the full text of the study at: https://www.ncbi.nlm.nih.gov/pmc/articles/PMC6859828/), Shannahoff-Khalsa and colleagues recruited healthy adults diagnosed with Obsessive-Compulsive Disorder (OCD) who did not respond to first line therapies. They were randomly assigned to weekly 2-hour trainings for 4.5 months of either Kundalini Yoga meditation or relaxation response meditation. They were instructed to practice at home for an hour daily. Kundalini Yoga meditation is a combination of exercise, meditation, and breathing exercises. Relaxation response meditations employs various techniques to produce deep muscle relaxation. After the 4.5-month period, the groups were combined and all participants practiced Kundalini Yoga meditation for 7.5 months. The participants were measured before and after the 4.5-month training and at 1 year for OCD symptoms, OCD severity, anxiety, depression, mood states, and physical and mental health.

The patients in this study had not previously responded to treatment with drugs, cognitive behavioral therapy, or exposure and response prevention therapy. The present results suggest that Kundalini Yoga meditation is a safe and effective treatment for Obsessive-Compulsive Disorder (OCD) in these patients who were unresponsive to other OCD therapies. Future studies are needed to compare Kundalini Yoga meditation to first line treatments for OCD.

“Mindfulness is a useful technique for decreasing anxiety because of its emphasis on accepting your thoughts. When an intrusive thought pops up, you let it exist in your mind without providing it any weight. You experience the thought, but don’t judge it, change it or try to make it go away. You wait until it passes instead of thinking it should or shouldn’t be there.” – IntrusiveThoughts.org

Background: Obsessive-compulsive disorder (OCD) is often a life-long disorder with high psychosocial impairment. Serotonin reuptake inhibitors (SRIs) are the only FDA approved drugs, and approximately 50% of patients are non-responders when using a criterion of 25% to 35% improvement with the Yale-Brown Obsessive-Compulsive Scale (Y-BOCS). About 30% are non-responders to combined first-line therapies (SRIs and exposure and response prevention). Previous research (one open, one randomized clinical trial) has demonstrated that Kundalini Yoga (KY) meditation can lead to an improvement in symptoms of obsessive-compulsive severity. We expand here with a larger trial.

Design: This trial compared two parallel run groups [KY vs. Relaxation Response meditation (RR)]. Patients were randomly allocated based on gender and Y-BOCS scores. They were told two different (unnamed) types of meditation would be compared, and informed if one showed greater benefits, the groups would merge for 12 months using the more effective intervention. Raters were blind in Phase One (0–4.5 months) to patient assignments, but not in Phase Two.

Results: Phase One: Baseline Y-BOCS scores: KY mean = 26.46 (SD 5.124; N = 24), RR mean = 26.79 (SD = 4.578; N = 24). An intent-to-treat analysis with the last observation carried forward for dropouts showed statistically greater improvement with KY compared to RR on the Y-BOCS, and statistically greater improvement on five of six secondary measures. For completers, the Y-BOCS showed 40.4% improvement for KY (N = 16), 17.9% for RR (N = 11); 31.3% in KY were judged to be in remission compared to 9.1% in RR. KY completers showed greater improvement on five of six secondary measures. At the end of Phase Two (12 months), patients, drawn from the initial groups, who elected to receive KY continued to show improvement in their Y-BOCS scores.

One thought on “Improve Obsessive-Compulsive Disorder with Kundalini Yoga Meditation”