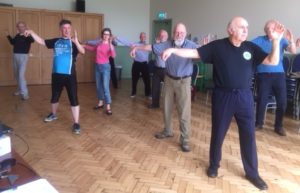 “It isn’t every day that an effective new treatment for some Parkinson’s disease symptoms comes along. Especially one that is safe, causes no adverse side effects, and may also benefit the rest of the body and the mind. . . . tai chi may improve balance and prevent falls among people with Parkinson’s disease.” – Peter Wayne

Parkinson’s Disease (PD) is an incurable progressive degenerative disease of the central nervous system. The condition is caused by the death of nerve cells in the brain that produce the neurotransmitter dopamine. There are around seven million people worldwide and one million people in the U.S. living with PD and about 60,000 people are diagnosed with PD every year. PD is associated with aging as the vast majority of patients are diagnosed after age 50. In fact, it has been speculated that everyone would eventually develop PD if they lived long enough.

Its physical symptoms include resting tremor, slow movements, muscle rigidity, problems with posture and balance, loss of automatic movements, and slurring of speech. PD itself is not fatal but is often associated with related complications which can reduce life expectancy, such as falls, choking, and cardiovascular problems. Parkinson’s Disease (PD) also has psychological effects, especially cognitive decline, anxiety, and depression. All of these symptoms result in a marked reduction in the quality of life.

In today’s Research News article “The impact of Tai Chi and Qigong mind-body exercises on motor and non-motor function and quality of life in Parkinson’s disease: A systematic review and meta-analysis.” (See summary below or view the full text of the study at: https://www.ncbi.nlm.nih.gov/pmc/articles/PMC5618798/ ), Song and colleagues reviewed, summarized, and performed a meta-analysis of the published research literature on the effectiveness of Tai Chi practice for the relief of the symptoms of Parkinson’s Disease. They found 21 studies, including 823 total patients with an average age of 67.5 years, 15 of which were randomized controlled trials and 8 contained active control conditions. No adverse events were reported.

These findings are significant and important suggesting that Tai Chi practice is a safe and effective treatment for the symptoms of Parkinson’s Disease. Tai Chi and Qigong are ancient mindfulness practices involving slow prescribed movements. They are gentle and completely safe, can be used with the elderly and sickly, is inexpensive to administer, can be performed in groups or alone, at home or in a facility or even public park, and can be quickly learned. In addition, it can also be practiced in social groups without professional supervision. This can make it fun, improving the likelihood of long-term engagement in the practice.

“There are many obvious reasons everyone with Parkinson’s should be doing Tai Chi, but it’s the ones that are not yet obvious that may be the most intriguing. One obvious reason is that Tai Chi is the most powerful balance and coordination enhancing exercise known. In many studies at major universities Tai Chi was found to be TWICE as effective in reducing falls as the other balance enhancing exercises being studied.” – Sherri Woodbridge

To systematically evaluate and quantify the effects of Tai Chi/Qigong (TCQ) on motor (UPDRS III, balance, falls, Timed-Up-and-Go, and 6-Minute Walk) and non-motor (depression and cognition) function, and quality of life (QOL) in patients with Parkinson’s disease (PD).

Evidence to date supports a potential benefit of TCQ for improving motor function, depression and QOL for individuals with PD, and validates the need for additional large-scale trials.