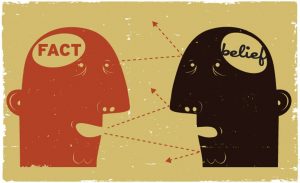 ‘Flexing your ability to think about your thinking and practicing brief bouts of daily meditation is good for your health and has an endless list of psychological and physical benefits for your well-being.” – Christopher Bergland

When there is a mismatch between what you say you want and what you do, it is a formula for unhappiness. In psychology it is called cognitive dissonance and it produces an uncomfortable state with a diffuse anxiety. It is psychological conflict resulting from incongruous or conflicting beliefs and attitudes held simultaneously. Cognitive dissonance may increase physiological activation, sympathetic nervous system activity which produces a measurable level of discomfort. To resolve this dissonance and reduce aversive activation, people in a dissonant state change their attitudes.

Mindfulness is known to improve cognition and reduce aversive feelings. It allows the individual to view their thoughts and feelings dispassionately. So, mindfulness may be helpful in resolving cognitive dissonance. In today’s Research News article “Mindfulness is not associated with dissonant attitudes but enhances the ability to cope with them.” (See summary below or view the full text of the study at: https://www.ncbi.nlm.nih.gov/pmc/articles/PMC7146909/),Muschalik  and colleagues explore the ability of mindfulness to help resolve cognitive dissonance.

They recruited healthy adults online who ate red meat. They were measured at baseline and one and 3 months later for their attitudes regarding red meat, implicit attitudes (positive or negative) toward red meat, intention to eat less red meat, red meat consumption, and mindfulness. Cognitive dissonance was measured as the difference between the explicit and implicit attitudes toward red meat; the difference between what the participants overtly said and what they covertly felt.

These results are interesting but are correlative, so no conclusions about causation can be made. But the results suggest that mindfulness is not related to cognitive dissonance. One can be highly mindful yet maintain different explicit and implicit attitudes. But mindfully accepting things as they are without judgment appear to reduce the relationship between dissonance and intention to act. In other words, mindful acceptance appears to assist in coping with cognitive dissonance, being able to accept the dissonance without judging it interrupts the intention to act on it.

So, cope better with cognitive dissonance with mindfulness.

“Mindful awareness, as we will see, actually involves more than just simply being aware: It involves being aware of aspects of the mind itself.  Instead of being on automatic and mindless, mindfulness helps us awaken, and by reflecting on the mind we are enabled to make choices and thus change becomes possible.” – Daniel Siegel

The mindfulness subskill accepting without judgment functions as a way to deal with dissonance. Future research should use this novel finding and investigate whether mindfulness can be used as a buffer in contexts where dissonance results in maladaptive behaviors.