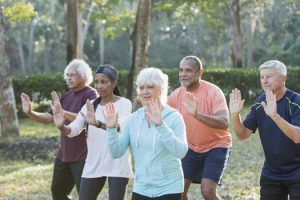 Improve Health and Cognitive Ability in the Elderly with Tai Chi

Human life is one of constant change. We revel in our increases in physical and mental capacities during development, but regret their decreases during aging. The aging process involves a systematic progressive decline in every system in the body. It is inevitable and cannot be avoided. This includes our mental abilities which decline with age including impairments in memory, attention, and problem-solving ability, and in emotion regulation. There is some hope for age related decline, however, as there is evidence that it can be slowed. There are some indications that physical and mental exercise can reduce the rate of decline. For example, contemplative practices such as meditation, yoga, and Tai Chi or qigong have all been shown to be beneficial in slowing or delaying physical and mental decline with aging

In today’s Research News article “The Effects of Tai Chi on Markers of Atherosclerosis, Lower-limb Physical Function, and Cognitive Ability in Adults Aged Over 60: A Randomized Controlled Trial.” (See summary below or view the full text of the study at: https://www.ncbi.nlm.nih.gov/pmc/articles/PMC6427726/), Zhou and colleagues recruited healthy elderly (aged 60-79 years) who were not practicing Tai Chi or other mindful movement practices and randomly assigned them to engage in one of three different Tai Chi practices for 12 weeks. The practices contained either 24, 42, or 56 different movements. They attended 3 times weekly Tai Chi classes. For the first 6 weeks the classes were 60 minutes while for the second 6 weeks the classes were 90 minutes. They were measured at baseline and at 6 and 12-weeks of practice for resting heart rate and as markers of atherosclerosis resting ankle brachial index and ankle pulse wave velocity. They were also measured for cognitive ability and movement tests of chair rise, walking, balance, and up-and-go test.

They found that for both males and females all three Tai Chi practices produced significant improvements in health-related outcomes at 6 and 12 weeks including improvements in walking, balance, up-and-go test, and ankle brachial index. Compared to the 24-movement practice, the 42- and 56-movement practices produced significantly better results for walking and balance and the resting ankle brachial index indicator of atherosclerosis. There were no adverse events recorded.

These results have to be interpreted with caution as there wasn’t a control condition such as a different exercise and there was no long-term follow-up. Nevertheless, the results suggest that Tai Chi practices is safe and effective treatment to produce significant improvements in the elderly’s movements, balance, and atherosclerosis. The 24-movement practice appears to be inferior to Tai Chi practices containing a greater number of distinct movements. Supporting these findings is the fact that these improvements including improved balance, movement, cardiovascular performance have also been documented in prior research.

Tai Chi practice is gentle and completely safe, can be used with the elderly and sickly, are inexpensive to administer, can be performed in groups or alone, at home or in a facility or even public park, and can be quickly learned. In addition, they can also be practiced in social groups without professional supervision. This can make it fun, improving the likelihood of long-term engagement in the practice. All of these characteristics make Tai Chi practice an excellent practice to improvement the health of the elderly.

So, improve health and cognitive ability in the elderly with Tai Chi

“Practicing Tai Chi regularly is known to enhance health and fitness. It can also help seniors with a better sense of balance and strength.” – MedicalAlert

Objective: The purpose of this study was to investigate the effects of Tai Chi (TC) on arterial stiffness, physical function of lower-limb, and cognitive ability in adults aged over 60. Methods: This study was a prospective and randomized 12-week intervention trial with three repeated measurements (baseline, 6, and 12 weeks). Sixty healthy adults who met the inclusion criteria were randomly allocated into three training conditions (TC-24, TC-42, and TC-56) matched by gender, with 20 participants (10 males, 10 females) in each of the three groups. We measured the following health outcomes, including markers of atherosclerosis, physical function (leg power, and static and dynamic balance) of lower-limb, and cognitive ability. Results: When all three TC groups (p < 0.05) have showed significant improvements on these outcomes but overall cognitive ability at 6 or 12 weeks training period, TC-56 appears to have superior effects on arterial stiffness and static/dynamic balance in the present study. Conclusions: Study results of the present study add to growing body of evidence regarding therapeutic TC for health promotion and disease prevention in aging population. Future studies should further determine whether TC-42 and TC-56 are beneficial for other non-Chinese populations, with rigorous research design and follow-up assessment.