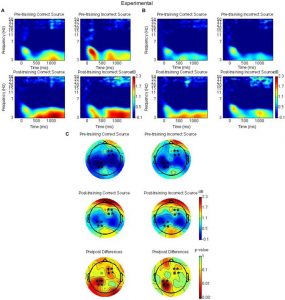 “A critical part of attention (and working memory capacity) is being able to ignore distraction. There has been growing evidence that meditation training (in particular mindfulness meditation) helps develop attentional control, and that this can start to happen very quickly.” – About Memory

There has accumulated a large amount of research demonstrating that mindfulness has significant benefits for psychological, physical, and spiritual wellbeing. One way that mindfulness practices may produce these benefits is by altering the brain. The nervous system is a dynamic entity, constantly changing and adapting to the environment. It will change size, activity, and connectivity in response to experience. These changes in the brain are called neuroplasticity. Over the last decade neuroscience has been studying the effects of contemplative practices on the brain and has identified neuroplastic changes in widespread areas. In other words, mindfulness practice appears to mold and change the brain, producing psychological, physical, and spiritual benefits.

In today’s Research News article “Increases in Theta Oscillatory Activity During Episodic Memory Retrieval Following Mindfulness Meditation Training.” (See summary below or view the full text of the study at: https://www.ncbi.nlm.nih.gov/pmc/articles/PMC6738165/), Nyhus and colleagues recruited adult participants and randomly assigned them to a wait-list control condition or to receive 4-weeks of once a week for 1 hour of mindfulness meditation training along with 20 minutes of daily home practice. They were measured for episodic memory and mindfulness before and after training. They learned words either by imagining a place associated with them or rating their pleasantness. The electroencephalogram (EEG) was measured from the scalp as the participants were engaged in an episodic memory task.

They found that meditation training produced a significant increase in mindfulness, especially the observe, describe, and act with awareness facets. The meditation group were also significantly better at identifying the source (place or pleasantness) of the word in the episodic memory task. With the EEG they found that the meditation group after training had significant increases in power in the Theta frequency band (4-7.5 hz.) in the frontal and parietal cortical areas of the brain. The increase in theta power were correlated with the level of the describe facet of mindfulness.

Theta power has been previously found to increase during tasks that test episodic memory. That was true here also. But in the present study the increases in theta power were greater after mindfulness meditation training. This suggests that the training altered the nervous system making it more responsive to episodic memories. The fact that mindfulness has been found to improve memory and that source memory was improved in the present study would appear to support this assertion. Hence, it would appear that mindfulness meditation improves episodic memory by enhancing brain processing of memories.

So, improve episodic memory and alter brain activity during memory retrieval with mindfulness.

“The meditation-and-the-brain research has been rolling in steadily for a number of years now, . . . . The practice appears to have an amazing variety of neurological benefits – from changes in grey matter volume to reduced activity in the “me” centers of the brain to enhanced connectivity between brain regions.” – Alice Walton