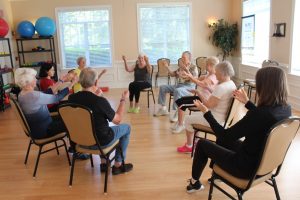 “tai chi provides plenty of health benefits at any age, but it is especially appropriate for seniors. It doesn’t require special equipment, it’s easy on the muscles and joints and it’s one of the best low-impact exercise programs out there.” – Perry Alleva

The aging process involves a systematic progressive decline in every system in the body, the brain included. This includes our mental abilities which decline with age including impairments in memory, attention, and problem-solving ability. It is inevitable and cannot be avoided. They’ve found that mindfulness practices reduce the deterioration of the brain that occurs with aging restraining the loss of neural tissue. Indeed, the brains of practitioners of meditation and yoga have been found to degenerate less with aging than non-practitioners. Tai Chi and Qigong have also been shown to be beneficial in slowing or delaying physical and mental decline with aging and to increase brain matter in the elderly.

Cognitive Behavioral Therapy (CBT) attempts to teach patients to distinguish between thoughts, emotions, physical sensations, and behaviors, and to recognize irrational thinking styles and how they affect behavior. This would also seem an appropriate therapy for the psychological and mental decline in the elderly. In today’s Research News article “The effect of Baduanjin qigong combined with CBT on physical fitness and psychological health of elderly housebound.” (See summary below or view the full text of the study at: https://www.ncbi.nlm.nih.gov/pmc/articles/PMC6320153/), Jing and colleagues compare the effectiveness of Qigong practice and Cognitive Behavioral Therapy (CBT) and their combination for the treatment of physical and mental problems of the housebound elderly.

They recruited elderly (over 60 years of age) who were housebound (left the house once per week or fewer over a period of at least 6 months) and randomly assigned them to receive either Qigong practice, Cognitive Behavioral Therapy (CBT), or their combination. They received the intervention at home for 1 to 1.5 hours per visit twice a month for the first 3 months and once a month for the next three months. They were encouraged to practice at home daily. They were measured before, at 3 months, and after the intervention for pulmonary function, activities of daily living, subjective health, loneliness, depression, quality of life and the housebound scale.

They found at the end of the intervention that all groups had significant improvements in their lung function, their daily activities, subjective health, loneliness, depression, and quality of life. They also found that the combined Qigong and CBT group was significantly less housebound (lest the house more often), lonely, and depressed, and had significantly greater subjective health than either of the treatments separately.

The results are very positive but the lack of an active control condition leaves open the possibility of attention effects, placebo effects, and experimenter bias. Indeed. the housebound elderly would be expected to react very positively to home visits and this by itself could improve their mental state. But the results suggest that although Qigong practice and Cognitive Behavioral Therapy (CBT) are effective treatments to improve the physical and psychological state of the housebound elderly, the combination of the two produces even greater benefits. The fact that their benefits are additive suggests the Qigong practice and CBT work by differing mechanisms.

Qigong is gentle and safe, is appropriate for all ages including the elderly and for individuals with illnesses that limit their activities or range of motion. It is inexpensive to administer, can be performed alone, at home, and can be quickly learned. So, Qigong practices would appear to be an excellent gentle practice to treat housebound elderly individuals and its effectiveness can be significantly increased by combining it with and Cognitive Behavioral Therapy (CBT).

So, improve physical and mental health in the homebound elderly with Qigong and cognitive behavioral therapy.

To investigate the effectiveness of Baduanjin qigong combined with cognitive-behavior therapy (CBT) on the physical fitness and psychological health of elderly housebound.

The 120 elderly housebound were randomly divided into 3 intervention groups: Baduanjin training, Baduanjin training combined with CBT, and CBT. The interventions were conducted by means of home visits over 6 months. Spirometry, SF-36 health survey of quality of life, and Lawton and Brody Instrumental Activities of Daily Living Scale (IADL) were used to collect physical health data, and self-evaluation of overall health status, self-evaluation of loneliness, and short-form geriatric depression scale (GDS-15) were used to collect mental health data at baseline, 3 months, and 6 months after intervention. Data was analyzed by repeated measures analysis of variance (rANOVA) and chi-squared test (χ2 test).

Physical and psychological statuses of elderly housebound were significantly improved by Baduanjin training combined with CBT. The effect of the combined intervention exceeded that of CBT or Baduanjin alone.