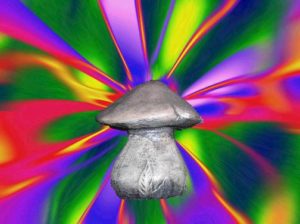 “The ingestion of psilocybin, brought on “mystical” experiences that reduced illness-related anxiety and depression in nearly 80 percent of subjects studied in research trials.” – Andrew McCarron

Psilocybin is a psychedelic substance that is found naturally in a number of varieties of mushrooms. It has been used for centuries particularly by Native Americans for their spiritual practices. When studied in the laboratory under double blind conditions, Psilocybin has been shown to “reliably occasion deeply personally meaningful and often spiritually significant experiences (e.g. mystical-type experiences).” How lasting the changes are has not been systematically studied in controlled research studies.

In today’s Research News article “Psilocybin-occasioned mystical-type experience in combination with meditation and other spiritual practices produces enduring positive changes in psychological functioning and in trait measures of prosocial attitudes and behaviors.” (See summary below or view the full text of the study at: https://www.ncbi.nlm.nih.gov/pmc/articles/PMC5772431/ ), Griffiths and colleagues examine the duration of Psilocybin effects when administered under laboratory conditions. They recruited participants from the community who were not experienced with either psychedelics or meditation and randomly assigned to one of three groups; very low Psilocybin dose – standard spiritual support, high Psilocybin dose – standard spiritual support, or high Psilocybin dose – high spiritual support. Participants and researchers who interacted with them were not informed as to the dosing conditions.

Psilocybin was administered in capsule form in the morning and the participants remained in the laboratory and were measured until Psilocybin immediate effects were gone 7 hours later. One month later the participants returned for a second similar Psilocybin session. For the standard support conditions, the participants met with “guides” for five 1 to 2-hour sessions and a couple of days after Psilocybin administration for another 1-hour session, followed up later with a 10-minute teleconference. Sessions consisted of instruction and support for their usual spiritual practices. For the high support conditions, participants met on a similar schedule and dad additional sessions approximately monthly thereafter. The “spiritual practice suggestions had three primary elements: meditation (10 to 30 minutes of sitting meditation daily); daily awareness practice (use of mantra and one-pointed attention in daily activities); and daily self-reflective journaling of insights, benefits, and challenges of spiritual practice in daily life.”

These results are striking and important. Administration of the psychedelic substance, Psilocybin, produced consistently positive personal and spiritual effects immediately and the effects appeared to be relatively permanent, still present after 6 months. In addition, engaging in spiritual meditative practices appeared to heighten these effects. The use of psychedelic substances is extremely controversial and for the most part illegal. But, the present findings suggest that at least under controlled circumstances, they may have positive and lasting, effects on the individual and their spirituality. Further research should explore the use of Psilocybin for the treatment of mental illness and the promotion of human well-being.

So, psilocybin in combination with meditation practice improves psychological functioning.