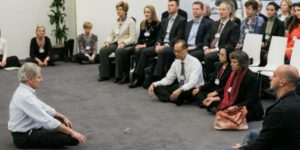 Over the last several decades, research and anecdotal experiences have accumulated an impressive evidential case that the development of mindfulness has positive benefits for the individual’s mental, physical, and spiritual life. Mindfulness appears to be beneficial both for healthy people and for people suffering from a myriad of illnesses. It appears to be beneficial across ages, from children to the elderly. And it appears to be beneficial across genders, personalities, race, and ethnicity. The breadth and depth of benefits is unprecedented. There is no other treatment or practice that has been shown to come anyway near the range of mindfulness’ positive benefits. With impacts so great it is important to know how to optimize the development of mindfulness.

Mindfulness is defined as the “awareness that arises through paying attention, on purpose, in the present moment, non-judgmentally” (John Kabat-Zinn). This is the goal of mindfulness training. There are, however, a vast array of techniques for the development of mindfulness. They include a variety of forms of meditation, yoga, mindful movements, contemplative prayer, and combinations of practices. Some are recommended to be practiced for years while others are employed for only a few weeks. Regardless of the technique, they all appear to develop and increase mindfulness. It is unclear exactly how much training is essential to producing maximum benefits.

In today’s Research News article “Efficacy of 8- and 4-Session Mindfulness-Based Interventions in a Non-clinical Population: A Controlled Study.” See summary below or view the full text of the study at: http://journal.frontiersin.org/article/10.3389/fpsyg.2017.01343/full?utm_source=F-AAE&utm_medium=EMLF&utm_campaign=MRK_368025_69_Psycho_20170822_arts_A, Demarzo and colleagues recruited college students and randomly assigned them to a no-treatment control condition or to receive either a 4-week or 8-week Mindfulness-Based Stress Reduction (MBSR) programs that met once a week for 2 hours. MBSR consists of body scan, meditation, and mindful movement practice. Participants were also request to practice at home each day. Participants were measured before and after training and 6 months later for mindfulness, self-compassion, anxiety, depression, positive and negative emotions, and resilience.

Mindfulness training has been shown in prior studies to improve mindfulness, emotions, anxiety, depression, self-compassion, and resilience. So, the benefits found in this study are not surprising. But the results on the amount of practice are interesting and suggest that considerable benefits accrue to participants in a short, 4-week, mindfulness training but for the full benefits an 8-week program is needed. Hence, unless an abbreviated program is needed for pragmatic reasons, training should be conducted for the full 8-week training period.

“people who have been mindfulness meditators for several decades have structural features in their brains that are proportional to their number of hours of practice.” – Daniel Segal

Background: Many attempts have been made to abbreviate mindfulness programmes in order to make them more accessible for general and clinical populations while maintaining their therapeutic components and efficacy. The aim of this study was to assess the efficacy of an 8-week mindfulness-based intervention (MBI) programme and a 4-week abbreviated version for the improvement of well-being in a non-clinical population.

Method: A quasi-experimental, controlled, pilot study was conducted with pre-post and 6-month follow-up measurements and three study conditions (8- and 4-session MBI programmes and a matched no-treatment control group, with a sample of 48, 46, and 47 participants in each condition, respectively). Undergraduate students were recruited, and mindfulness, positive and negative affect, self-compassion, resilience, anxiety, and depression were assessed. Mixed-effects multi-level analyses for repeated measures were performed.

Conclusion: To our knowledge, this is the first study to directly investigate the efficacy of a standard 8-week MBI and a 4-week abbreviated protocol in the same population. Based on our findings, both programmes performed better than controls, with similar effect size (ES). The efficacy of abbreviated mindfulness programmes may be similar to that of a standard MBI programme, making them potentially more accessible for a larger number of populations. Nevertheless, further studies with more powerful designs to compare the non-inferiority of the abbreviated protocol and addressing clinical populations are warranted.